Message of forgiveness gives a soul to Aretha Franklin biopic

One of the first scenes of “Respect,” the new film now in theaters on the life of Aretha Franklin, takes audiences to church. A young Aretha, about 8 years old, steps up to the podium and belts out a gospel melody that brings the congregation to their feet. As the camera pans around the room, the young singer transforms into the adult Aretha, played by powerhouse singer Jennifer Hudson, who finishes the song amid the continued sound of applause and “Amens.”

The scene makes clear a central fact about Aretha Franklin’s life: that Gospel spirituality lies at the heart of her upbringing and her music. And without being an explicitly Christian film, “Respect” is driven by the Gospel message of reconciliation.

Like any biographical drama, “Respect,” directed by Liesl Tommy and coming to theaters this Friday, has the challenge of capturing an entire life story in just under 21/2 hours without oversimplifying and without overwhelming viewers with information.

Like any film, it needs a central plot to tie everything together. “Respect” could have been a movie about a number of things — the evolution of a black female musical legend in the 1960s, the intersection of the civil rights movement with the music industry, or the impact of abuse and family dysfunction on children.

The film touches on all of these things, but at its core, “Respect” is a story about finding God. Not only does this common thread pull the film together into a compelling story, but it also casts a light of hope on a life fraught with tragedy.

From the outset, the film makes clear that although she was the daughter of a minister, Aretha’s life was not all prayer and innocence. As young Aretha, Skye Dakota Turner expresses the trauma of a girl who has lost her mother when she bursts into tears at her birthday party and falls silent during music lessons.

Later, the angry outbursts from her father (Forest Whitaker) illustrate a family life that sometimes suppressed Aretha’s ability to speak for herself. And woven throughout the film, flashbacks of her mother and her preteen pregnancy hint at an upbringing marked by tragedy and mistreatment. 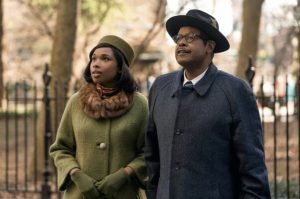 Jennifer Hudson and Forest Whitaker in "Respect." (© MGM via IMDB)

These details work as a backdrop not only to Aretha’s musical career, which shifted from church to recording studios, but also her personal life decisions. Although the explicit (and often excessive) portrayal of Aretha’s intimacy with the neighborhood bad boy Ted White (Marlon Wayans) is off-putting, it does get the point across that in running to him, she is running from her father, his mission, and his morality.

The moral and spiritual thread continues as Aretha’s music career unfolds. Thankfully, Jennifer Hudson does not disappoint when it comes to showcasing her music, from sitting at the piano building “I Never Loved a Man” to wowing crowds at Madison Square Garden with the song that gives the film its title.

Hudson’s seemingly effortless control over her voice, which swells from soft to booming from one song to the next, makes her the rare kind of singer who can do the Queen of Soul justice.

But beyond her vocal performances, Hudson’s portrayal of Aretha shows a woman who is searching not just for the right sound for a hit or the right message for the civil rights movement (which she is), but also for the meaning of her own life.

At one point in the film, she confesses that through her singing, she is still trying to discover who she is. The answer, it turns out, is hard to find. As we see her rise to fame, we also see her lash out at loved ones who tell her to rest, pour herself one drink after another, and break ties with her father when he accuses her of “not walking in the Spirit.”

All the lights and shadows converge in a climactic scene of conversion that unites all the major elements of Aretha’s life: family, music, and faith. It is a moment in which Aretha finds that she has no one to turn to but God, and that the only voice she can speak is one of prayer.

Because the film hinges on this scene, it drives home the truth that for all the injustice that Aretha suffered and inflicted throughout her life, her search for meaning had only one destination: the arms of a merciful heavenly Father. That message brings the story of the Queen of Soul directly into the reality of its viewers and gives them reason to find reconciliation in their own lives.

Because it dares to explore the dark corners of Aretha’s life, “Respect” is not easy to watch. But with Hudson’s voice, it is easy to listen to, and with its hope-filled message, it is easy to love.