‘Little Women’ is not the feminist movie Hollywood is used to

However many cinematic versions have come before, it seems that “Little Women,” the Civil War-era classic by Louisa May Alcott, was begging for a modern feminist take.

A strong-willed mother raising four girls almost entirely on her own, an ambitious female writer who longs to make a name for herself rather than get married, and not one but two rejected marriage proposals, even when the suitors were both fabulously wealthy: What more could a director ask for to showcase the self-asserting power of women?

There is no doubt that director Greta Gerwig’s remake of the long-loved tale of growing up in 19th-century New England has plenty to express via feminist undertones. The very first scene shows an encounter with the peppery Jo March vying to get her story published in a New York City publication.

Later, she screams out a line that could be made into a feminist anthem: “I’m sick of being told that love is all a woman is fit for!”

Such details might suggest another postmodern film depicting women who discover they don’t need marriage and family life to be happy. But fortunately, Gerwig does not forget the story she’s interpreting; or at least she does not avoid it.

All the additions, rearrangements, and modern flavors of the film, combined with stellar acting that retained the core spirit of the novel, hit a sweet spot between two realities that are often portrayed as at odds: that women are smart, talented, hardworking, and visionary, and that they have a particular genius for fostering love with their relationships and their homes.

To drive home this paradox, Gerwig’s approach is to draw out the dynamic personalities of all of the March women. Of course, Jo most readily embodies the progressive dimension of the female persona through her drive for greatness and fiery audacity to assert herself before anyone, man or woman.

But the film also draws attention to the other sisters’ individualities and decisions.

Beth is a magnificent pianist who is committed to helping others even when no one else will. Amy is a skilled artist who also displays assertiveness, passion, and wit. Meg has a knack for acting and wants a more affluent life. Even Marmee shows some layers by engaging in the war effort and, as she confides in Jo, choosing to confront and control her anger daily in order to transform it into patience.

None of the March women are boring characters, which immediately sets Gerwig up for a film with a strong pro-woman message.

Plus, the film makes sure to emphasize the societal struggles females faced at the time: Several characters acknowledge a woman’s inability to make a decent living for herself without marriage or inherited wealth, and lament that marriage would make herself, her income, and her children entirely the property of her husband.

The centrality of home for the sisters continues into adulthood, and Gerwig is able to convey this convincingly through her brilliant decision to tell the story through flashbacks. Although the film opens with almost all of the sisters away from home, the crisis instantly draws them back, and the scenes that look back upon their childhood reveal why.

Through this scenic structure as well as the captivating character development, the film demonstrates that their attachment to home does not dilute them as female characters, but on the contrary enriches them. 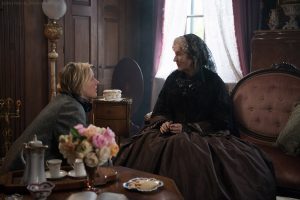 Greta Gerwig with Meryl Streep as Aunt March on the set of "Little Women."
(© 2019 CTMG, ALL RIGHTS RESERVED)

The film also shows how the sisters wrestle with societal expectations and the concept of marriage. None of their lives end up very far from the social norm, but the key is that none of them succumb to some inevitable female fate. Rather, each of their paths involves a conscious, independent, and free choice.

In a key scene in which Jo begs Meg not to get married, Meg assures her that she wants to marry the man she loves and work through life with him. In fact, for her marriage is no mundane life decision but the fulfillment of her life’s dream. It’s a pursuit of a dream, the film shows, that’s no less important than Jo’s unorthodox one.

Ultimately, even Jo cannot resist the powerful draw of companionship. After all, she has spent her whole life immersed in the joys of family life, and even her dream to be an independent, self-supporting writer cannot erase the longing for love in relationships at home.

This whole tumultuous process reaches its climax precisely when Jo has her glorious feminist outburst: After her explosive line, “I’m sick of being told that love is all a woman is fit for!” she pauses and admits with a sigh, “But I’m so lonely.”

While at first Jo (and perhaps many women today) might see that yearning for love a sign of weakness, Gerwig’s “Little Women” makes clear that this need not be the case. Jo finds a man who is just as blunt as she is, chases after him in her own Jo March way, and launches on the adventure of building and running a bustling school with him.

The final scene reveals a Jo who is exactly herself — still a passionate and driven author, still a firecracker — while having given herself in love to another and built a home of her own.

This is the key of Gerwig’s “Little Women.” Each of the March sisters is her own person, and she makes her own decisions. She does not cower in the face of social challenges, but neither does she shun the life of marriage and the home simply because they are what has always been done.

Each sister makes the life of the home her own, showing that it need not be oppressive but can be empowering.

The message of women’s ingenuity both as members of society and as family members has always been embedded in the novel “Little Women,” and it is what has made the story so enduring for over 150 years.

But by highlighting the characters with renewed energy, and by blending in the best of the modern women’s movement, the latest “Little Women” presents an inspiring, refreshing work of art that must not be overlooked.