Lessons from the spiritual journey of Bieber the believer

Between dentist waiting rooms and online $1 per year (for the first year) magazine subscription offers, I have been a little surprised at some of the stuff I am reading lately.

The first example that comes to mind is a magazine that seems marketed toward younger, richer and more fashionable men than I. The glossy publication full of pictures of men wearing clothes with footnotes about pricing had a media celebrity bungee jumping on the cover. After a few pages of pricey accessories, I was stunned to read a kind of religious reflection.

The editor of the magazine seemed almost embarrassed by the fact that the third cover story in a row spoke about Christian faith.

I don’t know what is more surprising: the fact that the magazine in question was GQ, or that the subject was Justin Bieber. The letter from the editor almost frets, “Is God making a comeback?”

“The Spirit blows where it will,” as translations of the Gospel of John 3:8 used to say (they now say “wind,” which I do not think is an improvement). Even though he is not a Christian (he believes in reincarnation) the editor relates to his subject’s tattoo, “because my own pathway out of my own dark night of the soul required me to crack open my heart and allow myself to truly surrender to being a child of God.”

The tattoo in question is across Justin Bieber’s midriff. Amid the abundant decoration on the pop star’s torso are large letters that spell “Son of God.” So — Bieber is a believer! 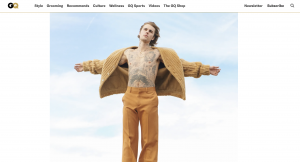 The interviewer was clearly charmed by the pop star’s profession of faith.

“It is beautiful to hear Justin Bieber talk about God. ‘He is grace,’ he says. ‘Every time we mess up, He’s picking us back up every single time. That’s how I view it.’” Here is an interesting stylistic note: “He” is capitalized in the middle of a sentence because it refers to God. Many liturgical books have stopped doing that.

I am not ashamed to say that I know very little of the musical oeuvre of Bieber. Recently a young friend from El Salvador sent me one of his songs on WhatsApp and I had to ask who it was. The song, “Lonely,” is a real ‘cri du coeur,’ four letter words and all.

“Everybody knows my name now / But something ’bout it still feels strange / Like looking in the mirror, tryna steady yourself / And seeing somebody else.” The singer complains, “Everybody knows my past now / Like my house was always made of glass.”

It’s not great poetry, I grant you, but we live in an age when Bob Dylan received the Nobel Prize for Literature.

Still, the human experience behind the more serious Bieber persona is worth looking at. Autobiography has been a vehicle for religious conversion since Paul fell off his horse on the way to Damascus. Even the rich and famous can suffer. And there is something that rings true about a man worth $130 million who nevertheless says, “What if you had it all / But nobody to call? / Maybe then you’d know me / Cause I’ve had everything / But no one’s listening.”

The article states that when Bieber was 15 and already a music phenomenon, he met a pastor named Judah Smith. Smith and his wife are involved in an enterprise called Churchome, and a few minutes spent on its website suggests a brand of celebrity-chic Christianity.

But Smith did something for the young man who was already world famous. He never asked Bieber for anything, but provided him with a model of a loving family, the star says.

“It was something I always dreamed of because my family was broken. My whole life, I had a broken family. And so I was just attracted to a family that eats dinners together, laughs together, talks together.”

Something tells me that Churchome is probably closer to “superficial” Christianity than to the “mere” Christianity defined by C.S. Lewis — the pastor himself is worth $60 million. But I am glad to hear even celebrities talk about Jesus. It reminds me of when the disciples in Luke 9:49 complain to Jesus about someone unknown to them who is driving out demons in the Lord’s name. “Do not stop him,” Jesus says, “for whoever is not against you is for you.”

We live in a culture that gets uncomfortable with the wishing of “thoughts and prayers” for victims of tragedy, and substitute secular tropes instead. All sorts of commentary, some of it joyful, is signaling that we live in a time of people losing their religion and abandoning faith. Maybe the commentators should take a look at GQ on Bieber.

Some might say that a young millionaire pop idol’s pilgrim’s progress is just glitter religion, and GQ is indulging in a sentimental voyeurism as cynical as paparazzi stalking celebrities on the beach. Can the jet set really have dark nights of the soul?

I understand some skepticism, but how not to enjoy a famous young man who said a pastor made him think of a relationship: “What God could be for him. What he could be for God.”

I never expected GQ to remind me of Jesus’ saying “What does it profit a man if he gains the whole world and lose his own soul?” (Mark 8:36). The Spirit blows where it wills.