Learning from our kids’ scary stories

Our school here in Cleveland is set to reopen after Labor Day, if the good Lord is willing and the angst of Ohio’s officialdom doesn’t rise. The parish is most alive during the week when our students are here, so, as pastor, I have been looking forward to the day classes commence again. The formation of young minds and hearts is such an important work for the Church, and has been happening at our parish since the 1860s.

This was made real for me by a contest some of our students participated in with an educational press: an anthology of Halloween-inspired stories written by middle-school students published to stimulate young authors, who receive a copy of the anthology and get to see their creativity in print. 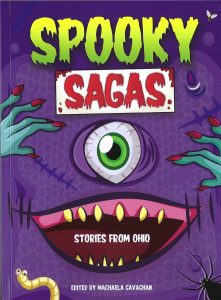 The cover of the recent anthology of scary stories by schoolchildren in Ohio.

I read the book during a lull in the quarantine. Now, I know the theme was “Spooky Sagas” and that the stories were supposed to be in a grammar school horror genre, but I had a strange sensation reading them. They scared me, not for the details of the plot, but for what they said about the plotters.

My first reaction while perusing our kinder gothic was, “What ever happened to ‘happy ever after?’ ”

In one story, “Halloween Monsters” come out of an enchanted book on Oct. 31 each year not just to chase and scare trick-or-treaters, but, “Then they started eating them, chewing them and spitting them out.” The “kids” put up resistance, but “the monsters still won!”

Another had a girl named “Aniyah,” who disappeared along with her coach and other cheerleaders, and the story concludes, “rumor has it, she still haunts the town.” This might have been either a tribute to a friend or a revenge fantasy, because the next story was by “Aniyah.” Edgar Alan Poe has nothing on the latter for scary endings. Hers is “As I awoke the skeleton was staring at me!”

In another story from our Holy Name students, a girl and her brother discover a headless zombie in a neighbor’s garage. The police are called and find nothing, but she has “nightmares ever since.” Only one story has an ending more or less positive, looking back on “the scariest night of my life” when the horror was over. Two “urban environment” stories reveal a little lack of confidence in first responders, probably based on the fact that ours in the city are overwhelmed by many cases for limited personnel, even before headless zombies start appearing in the neighborhood.

I decided to compare our kids’ stories with those published in the book from a suburban Catholic school in our diocese. Perhaps it is pride, but I felt that there was an intellectual coherence about our kids’ fables sometimes lacking in the tales of the suburban kids, whose literary style I would call non sequitur.

The stories of the suburban kids do, however, generally have a lighter tone. Instead of child-consuming monsters, some have parents or siblings playing tricks, or pets being mistaken for ghosts. Two even mention “fathers.” Another said the author had mistaken “Dad” for a zombie only because he had not had his morning coffee yet.

The absence of fathers and the predominance of mothers, some taken away by monsters, others more than a little monstrous themselves, made me remember a book by German Cardinal Paul Cordes called “The Eclipse of the Father,” responding to some of the writings of American journalist Susan Faludi, which propose that the role of the father has become secondary in the family and in society.

The cardinal saw consequences not just in family life and individual development, but also in religious imagery. How are we to understand God as Father if fatherhood is not meaningful? A story that made me wonder about real-life antecedents had a young werewolf realize that his mother was about to be married to a vampire, the traditional enemy of the lycanthrope family and she hadn’t told him.

It is perhaps reading a great deal into student prize stories to see societal problems, but it is in fantasy that a child comes to self-knowledge.

The Austrian-born psychologist Bruno Bettelheim studied children’s literature in a work entitled “The Uses of Enchantment.” There he proposed that “a child needs to understand what is going on within his conscious self so that he can also cope with that which goes on in his unconscious.” 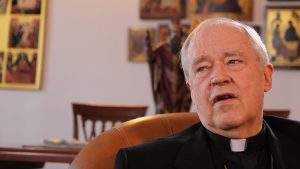 Daydreaming, defined as “ruminating, rearranging, and fantasizing about suitable story elements in response to unconscious pressures,” can help a child understand and deal with what goes on in his unconscious, Bettelheim argued.

Cliches abound in the stories, both in phrasing (“No one ever heard from Alan again.”) and in plotting (“He grabbed us and we vanished. Poof!”) It is to be expected that children’s fantasies will be shaped by popular movies, television, and video game scenarios. However, the darkness of some of these fantasies would make me ask the school psychologist to interview some of our budding Stephen Kings.

“Once upon a time there was a mom,” begins one that describes the woman as a serial killer of her children and others. “The zombies came and ate Granma” concludes another, which may be a take on “The Little Red Riding Hood” fairy tale, but sounds alarming coming from a kid who is probably cared for by his grandmother.

When a little girl looked for her friends, she discovered that “A dead clown ate them. She was really sad.” Another memorable line was, “As he stabbed them, blood was everywhere.” Obviously, gore is a constant in popular imagery — just watch some television or movies — but when will we try to stem the blood-tinged tide? There is an occasional happy gory ending as in, “The zombies were trying to eat my brain but I pulled out my sword and chopped them to pieces.”

Another aspect of the stories I noticed is a kind of horror imagination-Stockholm syndrome, as in, “If you can’t beat them, join them.” One boy wrote about monsters: “I always wanted to meet one.” Several stories portray a kind of spooky camaraderie among ghosts, zombies, werewolves, and vampires who “chill” together.

There is a kind of alienation chic in some of the stories. “Spooky Sagas” are sometimes told from the point of view of the spook. One girl says the “bad thing” about being a vampire is not being able to tell anyone and having to avoid sunshine. There are downsides to everything, I suppose is the message, but what makes a kid want to imagine being someone else’s nightmare?

I think we ought to make our returning students write more stories this school year. Maybe if you want to know what a kid is thinking about, you should ask him to write a story that will scare other children. He will likely tell you what is bothering him.

Maybe we can become better acquainted with children’s lives reading their fantasies, and as a side benefit help them to work on sentence structure, spelling, parts of speech, and vocabulary.

Seeing the play of their unconscious, we can better see what their issues are, how the culture is affecting them, and how they see their relationships with others.

The Nobel Prize-winning writer V.S. Naipaul once said that nonfiction writers can pretend to be other than they are, but fiction writers reveal much more about themselves. Tell me a story, and you tell me about you.