'Just Mercy,' 'Beautiful Day in the Neighborhood' among Christopher winners

The hit movies "A Beautiful Day in the Neighborhood" and "Just Mercy" were among this year's Christopher Awards movie winners.

Television winners in the awards' 71st anniversary year include the documentary "College Behind Bars," the docudrama "I Am Somebody's Child: The Regina Louise Story" and "Dolly Parton's Heartstrings: These Old Bones."

These and other TV and film winners, announced Aug. 25 in New York, join book winners announced in April by the Christophers, which is rooted in the Judeo-Christian tradition of service to God and humanity. The ancient Chinese proverb, "It's better to light one candle than to curse the darkness," guides its publishing, radio and awards programs. 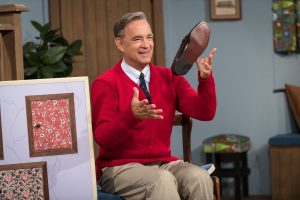 Tom Hanks stars in a scene from the movie "A Beautiful Day in the Neighborhood." The Catholic News Service classification is A-II -- adults and adolescents. The Motion Picture Association of America rating is PG -- parental guidance suggested. Some material may not be suitable for children.(CNS photo/Sony)

In "A Beautiful Day in the Neighborhood," an assignment to interview children's television host Fred Rogers inspires a cynical journalist to face his demons and transform his family relationships for the better. "Just Mercy" chronicles crusading lawyer Bryan Stevenson's real-life battle to exonerate an innocent African American man condemned to death row in Alabama, following a trial marked by racism and lies.

In the third film winner, "The Peanut Butter Falcon," a young man with Down syndrome, tired of living in a nursing home for senior citizens, escapes and embarks on an exciting and dangerous road trip with two lost souls who become like family. 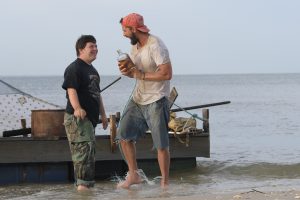 Zack Gottsagen and Shia LaBeouf star in a scene from the movie "The Peanut Butter Falcon." The Catholic News Service classification is A-III -- adults. The Motion Picture Association of America rating is PG-13 -- parents strongly cautioned. Some material may be inappropriate for children under 13. (CNS photo/Roadside Attractions and Armory Films)

"College Behind Bars" profiles a small group of incarcerated men and women transforming their lives as they pursue college degrees in one of the most rigorous and effective prison education programs in the United States.

In "Dolly Parton's Heartstrings: These Old Bones," family, faith and forgiveness come into play when a young lawyer struggles to maintain her principles while suing a clairvoyant old woman with whom she feels a mysterious connection.

"I Am Somebody's Child: The Regina Louise Story" dramatizes the true story of an African American foster child who is separated from the white case worker who wants to adopt her because of the state's racial policies.

In other TV winners:

-- "Return to Normandy," which aired as segments on both ABC's "Nightline" and "World News Tonight With David Muir," U.S. soldiers who took part in the Normandy invasion 75 years before travel to France and recall the heroism and horrors they experienced.

-- Another documentary offering, "America ReFramed: Perfectly Normal For Me," shows young people with physical disabilities taking part in a special dance program that demonstrates their can-do spirit, as well as the powers of inclusion and a loving community.

-- In the romantic drama "Two Turtle Doves," three people grieving the loss of loved ones during the Christmas season find healing and joy through talking about their grief with each other instead of keeping it bottled up.

There will be no awards ceremony this year, as had been the past custom, due to the coronavirus pandemic.