In a casual conversation with her fellow soldiers, Hua Mulan — disguised as the young male soldier Hua Jun — asserts that to her, an “ideal woman” is courageous, funny, and intelligent. Her companions laugh, amused by the unconventional statement. But what is equally amusing is that by her own standards, Mulan herself falls short.

No musical numbers, no talking animal sidekick, and no slapstick humor surround the new Mulan, played by Yifei Liu. On top of these removals, Caro piles on nearly 30 minutes to the original film’s satisfactory 88, only to make a slow film drag further. Overall, the changes water down not only the plot but also the classic story’s message on the female vocation.

The basic story that both the old and new versions convey — a warrior’s daughter disguises herself as a man to serve in her father’s place in the imperial army — is itself a reflection on female virtue. In other words, it asks the following question: How is a woman, regardless of her personality, to live with honor? 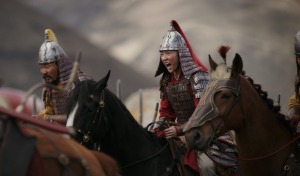 Perhaps in an attempt to highlight this theme even more, the new film inserts Xianniang, (Li Gong), a female foil for Mulan. But to answer the story’s central question, the most telling foil for our protagonist is herself — that is, the Mulan of the 1998 Disney film. Voiced by Ming-Na Wen, the Mulan of 22 years ago exhibited a more holistic picture of femininity than Liu’s stoic character ever conveys.

This might sound counterintuitive. Wen’s Mulan, though also a misfit within a community that told women to be silent and submissive, was clumsy, forgetful, and outspoken. She did not even have the new Mulan’s precocious combat skills to win her father’s admiration. Recall her arriving dusty and late to an appointment, or botching her meeting with the village matchmaker so thoroughly that she spilled tea, smashed plates, and started a fire within about three minutes.

Liu’s Mulan may look more human than her cartoon predecessor, but she has only a fraction of her personality. Moved by compassion, the latter takes her father’s place in the imperial army, consoles her captain when no one else would, and risks her life to save her fellow soldiers. In other words, it was her virtue, not her physical prowess, that sets Wen’s Mulan on the path to becoming a heroine.

Compare all of that (in addition the benefit of a set of unforgettable songs, characters, and humor) to Liu’s somber rendition of Mulan.

To be fair, Caro’s film maintains the original’s contrast between the silent and submissive wife to the bold woman warrior. But by stripping down the protagonist’s character, it leaves no room for any mark of feminine heroism beyond the fact that she rides and fights with her hair down.

The new Mulan’s impressive combat moves certainly send the message that women are just as capable of courage and prowess as men are. But Caro’s depiction comes at the expense of robbing Mulan of every other noble and unique quality that she could offer as a woman. This new Mulan is defined as a fighter, and nothing else.

Even in the film’s most tragic moments, Liu’s Mulan hardly twitches an eyelash, and her subdued voice and expression (while perhaps meant to convey the seriousness of a warrior) drain her of the zest and compassion that made the character of Mulan winsome in the first place. 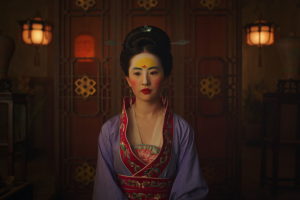 Moreover, instead of opening her heart to a potential romantic bond as the original Mulan did, this Mulan shuns it as if it were a weakness. As a result, the audience is left not with the hope of a union between a dynamic woman and man, but with the stark takeaway that the modern heroine can only fulfill herself if she suppresses her emotions and rejects anything that hints at the “traditional” female role, particularly marriage.

St. Pope John Paul II wrote of the “feminine genius” that God bestows on every woman. This genius enables women in a particular way to “see persons with their hearts,” especially attuned to their needs and quick to respond with empathy. Such a tendency in no way makes women inferior to men but rather distinguishes them as their complementary equals.

While the old Mulan embodied that perspective by making the female vocation her own, the new one rejects it entirely. The old Mulan found a way to avoid being straightjacketed into unjust societal expectations while still expressing her unique feminine gifts for the betterment of others.

While the new Mulan is brave and shrewd in battle, she lacks the expressiveness and ingenuity that she herself professed to be the traits of an “ideal woman.” The new Mulan strips herself of every feminine gift to the point that her only mark of femininity is her external appearance.

Such a standard of female heroism denies that a great heroine like Mulan can bring honor to her family (and, within a Christian understanding, give glory to God) not by suppressing her feminine identity but by letting all of her gifts shine forth. Tragically, it forgets that Mulan is a true heroine not in spite of her feminine genius, but largely because of it.

“Mulan” is available to stream on Disney+.