Timing is everything, and for Father George Rutler, author of “Calm in Chaos: Catholic Wisdom for Anxious Times” (Ignatius Press, $14), the timing of the Church’s most recent struggles is part of a pattern of crisis and resolution throughout our history.

“One doesn’t have to be a prophet to say that there will be anxious times,” says Father George Rutler. “That’s been the case since our first ancestors dropped the ball in the Garden of Eden.”

But the times we’re living in now have incited panic and a widespread fleeing from the faith for many Catholics, and those who are left to pick up the pieces are struggling to resolve their feelings about the Church’s most current crisis with the faith they have long cherished. 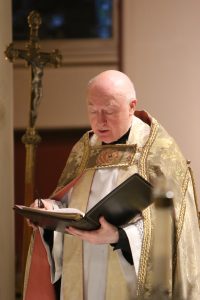 In his book, Father Rutler offers some guidance on staying hopeful.

Kris McGregor: In your book, you say, here’s the present situation, but don’t let it rob you of your hope. How important is hope?

Father George Rutler: There’s a difference between optimism and hope. Optimism is wishing things will get better, which they may or may not. But hope is trusting that God has an agenda that only he knows, and he works his purposes out. It’s up to us to cooperate with that agenda or not — we have free will. But sometimes in the darkest hour of civilization, he becomes even clearer.

I think the Church, and society in general, is going through a massive purge. What’s going on now, as unpleasant as it is, is like extracting a tooth. Once it’s out, you feel better. We’re dealing with a spiritual cancer. Many Church leaders have failed in so many ways — we all have. So Our Lord is dramatically intervening and taking out this cancer, and that’s why I’m hopeful.

Father Rutler: People who say they’re losing their faith are just losing what they mistakenly thought was faith. Faith is a gift from God, and God doesn’t give us something and then grab it away. We don’t lose faith — we throw it away.

In the American Revolution, Thomas Paine wrote that powerful pamphlet, “Common Sense,” rallying people to be brave in a crisis.

McGregor: What role does “cultural Catholicism” play in this crisis?

Father Rutler: We have a lot of cultural Catholicism — weddings, baptism. For a lot of people, unfortunately, these are cultural ceremonies to get the family together. I’m at a lot of weddings, and at one, we had a wedding planner. We had a big icon of Christ over the altar, and he said, “When the bride comes in, could you dim Jesus a little?”

What’s going on here? What do we think matrimony is? 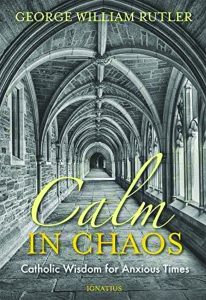 It’s at the end of the spectrum too, in the funeral. When people turn a funeral Mass into some kind of sentimental gathering where people make speeches about how good Uncle Fred was, they’ve lost the sense of God, who gives us the faith.

McGregor: A lot of people think these political times are the worst it’s ever been, but is that really true?

Father Rutler: George Washington was at the point of despair when he saw what was happening to the country he’d fought to create. Their newspapers were as vicious as what we have now.

We have to remember that St. Joan of Arc was about the age of a college freshman when she led an army and saved France. Alexander Hamilton was 21 when he was a lieutenant colonel fighting in the Revolutionary War. In the Second World War, the average age of a bomber pilot was about that of a college sophomore. None of them ran into safe spaces.

What we need now in the Church are people with vision and purpose. The weakness and confusion is ripe from the very top. But just as you have heroes of each generation face the crisis of the time, we just pray that these people will rise up. It’s a crisis of saints.

Our Lord has been raised from the dead. He says, “Be of good cheer. I have overcome the world.” It’s the devil who doesn’t want us to know that. So these are the times that Our Lord says to us, “Will you also go away?” Our response has to be the same as that of St. Peter: “Lord, to whom shall we go? You have the words of eternal life.”