The metaverse is coming. Can it be saved?

Zuckerberg responded to the controversy by claiming that the “metaverse” is the next chapter of the internet, and his company was re-focusing its mission to build it and shape its contours.

The metaverse, according to Zuckerberg, is a “creative economy” that users will build together, where users can “express ourselves and experience the world with ever greater richness.”

“The next platform and medium will be even more immersive,” he remarked at Facebook’s Connect 2021. “... [a]n embodied experience where you’re in the experience, not just looking at it.”

There are a variety of opinions among tech reporters and experts on how far and wide the new technology will reach into daily life. But there is little debate that the metaverse’s arrival is inevitable, and that it will, for better or worse, shape work, education, entertainment, and communication.

What seems missing, at least so far, is any person or entity dedicated to thinking through the moral implications of the metaverse, or any necessary guardrails. Few, if any, seem to be asking the bigger question: Can any good come from the metaverse?

What is the metaverse?

If the term “metaverse” sounds like science fiction, that’s because it is — or at least, that’s where it originated. The concept was first coined by science fiction writer Neal Stephenson in his 1992 novel “Snow Crash.”

In an interview with Axios, Stephenson said that his experience in computer graphics led him to ask himself  “what would have to happen to make … 3D graphics technology as cheap and ubiquitous as television was at the time”?

Soon after, other science fiction authors took up the idea of an online universe where people could escape potential catastrophes on Earth.

Some experiences are aimed at replicating real-world ones, such as being in a classroom or workplace, while others allow users to create and interact in fantasy worlds.

While the appetite for the metaverse is still unclear — evidenced by the fact that in early February 2022, Facebook set the record for the largest one-day drop in stock market — many companies are betting big on its future popularity and prevalence.

Even though the metaverse is predicted to take a decade to roll out, Microsoft, Unity Software, Nvidia, Google, and Apple, among others, are scurrying to build out the hardware and the equipment to facilitate these virtual experiences as fast as they can, from goggles to glasses to graphics.

Companies have reason to believe their investments will be profitable, as millions of people, including children, already spend a significant amount of time on social media platforms and in the gaming world.

In summer 2020 when the first wave of the COVID-19 pandemic was in full swing, more than three quarters of American children were reported to be on Roblox, a popular gaming universe. In fact, the company reported that its 164 million players spent 3 billion hours on the platform that July.

This past August, pop star Ariana Grande partnered with the video game Fortnite to host a virtual reality concert: 78 million players participated, signaling to entertainers that one virtual concert could be more profitable than an in-person tour by a huge margin. Professionals ranging from artists to real estate companies are receiving big paydays for everything from virtual art to virtual property. 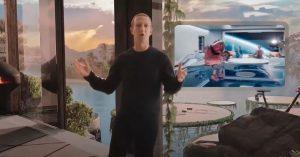 Meta CEO Mark Zuckerberg in a livestreamed presentation on the metaverse at Facebook Connect 2021 on Oct. 28, 2021. (YouTube)

Surely, not everyone will prefer digital entertainment to live performances, or buy up virtual real estate when their family needs a roof over their heads. But experts predict that certain areas of daily life will look different.

Over the last years, the COVID pandemic has forced many sectors that privileged face-to-face interaction to embrace virtual communication and community. As a result, workplaces have changed the way they carry on business when people are not able to meet in person. In many respects, the pandemic paved the way for it to be more socially acceptable — and in some cases, cheaper and more practical — to “virtually connect.” But instead of having meetings on Zoom mediated through a screen, developers want to create virtual meetings that “feel” like ones in the real world.

Others predict that industries which used to rely on in-person meetings or hands-on training will shift to virtual and augmented reality. While this type of technology is already used in the military, health care, and law-enforcement fields for training, forecasters predict that any industry that requires training on sophisticated or dangerous equipment could utilize it.

Others see educational opportunities. If organizing a field trip is too difficult or cost-prohibitive, teachers could opt for a virtual tour. Destinations could include any place in the world — and beyond to the solar system.

In lieu of showing students films or footage of a historical event, educators could simulate the event itself and have students “experience” it firsthand. (That would raise the issue of interacting with avatars of dead people, the implications of which have yet to be considered in full.)

The metaverse is also expected to create new jobs and industries. Presently, companies working on building the metaverse are engaging with engineers, graphic artists, data scientists, and hardware developers. But just as with the dawn of the internet and the smartphone, new job sectors yet to be imagined will emerge in its wake. How they might affect brick-and-mortar industries and employees serving real world needs has yet to be seen.

While the tech companies developing the metaverse are mostly focused on gauging market interest and removing barriers to entry, those reporting on its development have already identified ethical, legal, and social issues ripe for consideration.

In the Meta rollout, Zuckerberg pointedly said that privacy and security will have to be built into the metaverse, but he stopped short of saying how that would be done.

Others have concerns about how addictive social media and screens already are, and some worry about people preferring virtual reality so much that they neglect their real-world duties and relationships.

“There’s a potential to preferring it to traditional life,” said Rachel Kowert, an Ontario, Canada-based psychologist who has studied the mental health of gamers.

Social media, gaming, and screen time already affect juvenile and adolescent development. “Their primary learning about how to behave and engage with the world is through their peers and social interaction,” Kowert has said. “It’s a critical component of how we learn to be people.”

Social scientists have come to the consensus that there is a correlation between screen use and increased depression, anxiety, and isolation. Psychologists Jean Twenge and Jonathan Haight have written extensively on the relationship between the ubiquity of the smartphone and skyrocketing rates of self-harm.

Given the profitability of the pornography and video game industries, it is not unreasonable to predict that “immersive experiences” in highly sexualized or violent scenarios will be developed — and what kind of regulation might be put in place is unclear. The consequences in the real world could be significant, given that sexual dysfunction and increased aggression are already linked to these media.

Last, there is some concern about what effect this will have in a hyper-polarized society. While Zuckerberg pledged that Meta is in the business of connecting people, he also said that in the metaverse, users can be highly selective about who they engage.

In an age of fractured news media and divisive algorithms, questions will surely emerge about how this will heal or harm existing divisions.

Can faith be found in the metaverse?

How Christians should approach the metaverse is up for debate.

In a recent op-ed in The New York Times, columnist Tish Harrison Warren, an Anglican priest, argued that at this point in the pandemic, churches should stop streaming their services, because “people need embodied community.”

“We believe God became flesh, lived in a human body, and remains mysteriously in a human body,” she wrote. “Our worship is centered not on simply thinking about certain ideas, but on eating and drinking bread and wine during communion.”

On the one hand, the sacramental and incarnational nature of Christianity lends itself to the idea that entering deeper into virtual reality runs counter to the imperative to encounter one another in the flesh, particularly the “least of these” who very well could be excluded from a virtual economy. 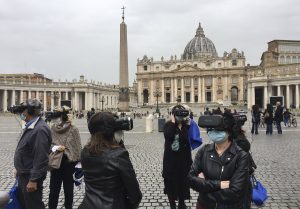 People wear virtual reality headsets in St. Peter's Square during a tour at the Vatican May 1, 2021. (CNS photo/Paul Haring)

On the other hand, Christians have been encouraged to evangelize the “digital continent” and bring Christ to the “digital peripheries.” Wherever human beings are, they need the good news.

So, should Catholics engage or resist the metaverse? According to Michael Hanby, Ph.D., associate professor of religion and philosophy of science at the Pontifical John Paul II Institute for Marriage and Family in Washington, D.C., we likely won’t have much of a choice in the matter.

“Internet technologies have become a regime of necessity for us,” he said. There will be no easy solution to this, but the first step, I think, is a much deeper understanding of the meaning of these technologies and the role they play in our lives even now.”

For Hanby, that means understanding that “modern technology projects human power beyond a human scale — metaverse technology does this in part by obliterating time and space — and so their downstream effects elude our control almost by definition.”

Luis Vera, Ph.D., associate professor of theology at Mount Saint Mary’s University in Emmitsburg, Maryland, has been giving a lot of thought to these downstream effects.

“There are lots of instances in which a modern technology creates problems which are accidental,” he said. “But in this case, it’s distinctive how deliberate the developers have been. They have created a cortisol and dopamine loop to comfort us or anger us, in order to learn more about us, gather more data about our lives, and predict or nudge our behavior.”

Vera, who writes about fundamental moral theology, technological ethics, and Catholic social teaching, speculates that even though we know developers have what he calls a “lab rat” anthropology — prodding and manipulating users without reference to their good — the metaverse is going make its way into our lives because of the shift to remote work and the popularity of the gaming universe, resulting in an even more expansive commercialization of our data.

While Catholics might worry about materially cooperating with a system that is increasingly evil, Vera says that the deeper question is, “Can I hack these platforms in a way so that it doesn’t affect the rest of my life? Can I engage it in a way that breaks the deeper rules of behavior that the platform is presenting to me?”

For guidance on doing this, Vera points students and readers to Pope Francis’s 2014 Message for World Communications Day, in which he compares the “digital highways” to the road that the man was left on, beaten and broken, in the parable of the good Samaritan.

“First-century roads were dangerous places,” Vera said. “Precisely because [it’s] a bad place, we need to be there.”

Vera wonders whether participating in the metaverse can itself be a “form of resistance.”

The signs of the times seem to indicate that people are going to need help putting virtual and augmented reality in their rightly ordered place and will need guardrails to help cultivate silence and practice charity.

In the age of the metaverse, this might be the most important work the Church has ahead of her yet.