Has Taylor Swift given up on her ‘Love Story’?

Three years ago, Taylor Swift told the world that the “old Taylor” was dead. In the 2017 single “Look What You Made Me Do” that launched her biting album “Reputation,” the country-turned-pop superstar left no room for doubt that she had rejected an old identity.

Two albums later, we now have a fuller picture of the new Taylor, and the transformation has not gone unnoticed.

Even in 2020, Swift has found a way to stay relevant. On July 24, she dropped the surprise album “Folklore,” selling 1.3 million copies in its first day and 2 million within the week, shooting to the top of music charts in the U.S. and around the world.

Rave reviews came pouring in. The Atlantic called the album “the stuff of which obsessive listening is built.”

“Some of us have spent years dreaming Taylor would do a whole album like this, but nobody really dreamed it would turn out this great,” gushed Rolling Stone. “Her greatest album — so far.”

And a review in Vulture sees the album as transcending time: “From the title to the music, ‘Folklore’ is an album about the wisdom and experience passed down through generations.”

Indeed, what makes “Folklore” so surprising was not just its timing, but its radical contrast with the Swift we thought we knew: Pick any song from this album, and you’ll be hard-pressed to find much of a resemblance with any of her previous work.

Ever since the release of “1989” in 2014, it was clear that the “Speak Now” (2010) Taylor Swift had faded away. Song by song, she was steadily remaking herself by folding more pop into her music and trading her small-town ballads in for big-city adventures.

Nevertheless, the brooding, earthy tone of “Folklore” is so disconnected from its predecessors that for many, it marks a more significant transition in her career. But as shocking as “Folklore” might seem, it represents a fitting transformation of mainstream American culture over the last decade marked by rebellion, self-indulgence, and disillusionment.

When examined in the context of her career as a whole, “Folklore” expresses the exhaustion of one who once believed in the happy ending of marriage but, unable to cope with the challenges and temptations of life, has given up on that dream.

Thinking of the old Taylor, “Love Story” is one of the first songs to come to mind. The feel-good tune captures the country-pop singer we all used to know and love (or hate), the musical face of high school heartthrobs and fairy-tale romance.

Swift’s 2008 hit offered listeners the story of Romeo and Juliet in its most innocent form: without the tragic ending. In this version of the story, love overcomes all challenges and leads to a proposal, a ring, and a happily-ever-after.

The song’s music video embellishes that vision. We see a quiet high school Taylor imagining herself and an intriguing boy reliving the classic story — complete with ball gowns, balconies, and lantern-lit gardens. The song — and its respective album, “Fearless” — present an innocent girl with confidence that love will triumph amid life’s ups and downs.

Fast forward nine years and four albums, and that girl is long gone. 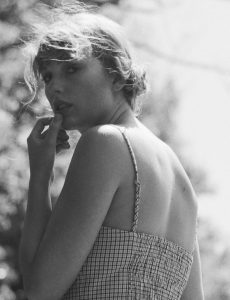 After dipping into pop with “Red,” diving headfirst into it with “1989,” and using it as a weapon of resentment in “Reputation,” Swift came out last year with “Lover,” which pulled listeners into a musical sugarland (the background of the album cover looks like it might be cotton candy).

Amid the string of catchy bops and carefree tunes, the title track offers the perfect foil to “Love Story.” In this song, we find that Taylor no longer fancies the classic fairy tale. Instead, she constructs a whimsical world that revolves around pleasure.

It is significant that the hero this time around is specifically called a lover, a term often synonymous with paramour. This implies something very much outside the context of the marriage end goal that “Love Story” honors.

Although the lyrics of “Lover” refer to long-term commitment, marriage itself is out of the picture. And in the music video, Swift wears many rings, but neither diamond nor wedding band is among them.

What’s more, we get the impression that even this “new Taylor” love story is wrapped in a cloud of fantasy. The video shows most of the tale encased in a snow globe, and Swift croons of a fantasy life without troubles.

Now, out of her quarantine cave, Swift has delivered “Folklore.” In its video, every drop of “Lover’s” color and pep has been drained away, replaced by grayscale shots of Swift wandering through the wilderness.

Although it features more fictional characters and poetic abstractions than her previous work, Swift’s latest album remains a personal one, as she herself professed when she tweeted that she “poured all of [her] whims, dreams, fears, and musings into” the songs.

So what do those musings tell us of her outlook on love now? The track “Illicit Affairs” offers an idea. In the subdued tone characteristic of the entire album, Swift describes what “real romance” is like.

Outside of the “Lover” snowglobe — and far, far away from the “Love Story” dream — she confides that truly passionate partnerships lead to nothing but heartbreak and ruin. The song embodies the tone of the whole album, a sense of disenchantment with reality that then becomes an art form.

Unfortunately, this outlook reflects today’s mainstream culture, one that, caught up in the bitterness of bad news and the emptiness of hedonistic lifestyles, sees any kind of committed love, let alone marriage and family life, as an unattainable dream.

At 30, the unmarried Taylor gives music to a philosophy that has come to characterize the millennial generation: that while marriage might have worked for my parents or grandparents, it is unrealistic for me given my finances, my preferences, my career goals, etc.

“Love Story” may be a fictional tale — as are “Lover” and many of the songs on “Folklore,” but its aspirations for the happiness of married life celebrated a simple reality. It recognized that no matter how much glamor you get or how big a reputation you build, there’s a simpler, perhaps purer happiness to be found loving and raising a family at home.

But as despondent as “Folklore” seems, there may be a glimmer of hope in the fact that Swift acknowledges her lonely walk through the wilderness as unfulfilling. After all, the last song on the album is entitled “Hoax.” Swift sings of her attachment to a lover she knows is unfaithful and cruel, but at least she sees the lie for what it is.

All that remains for her — and indeed for the rest of society — is to make a decision. We can either continue buying into the lies of transient pleasures, or we can reject it and seek something better.

Hopefully, all of us opt for the latter.