The United States is perhaps the last empire still within living memory of its Golden Age. The sun set on the British long ago and the Greeks have been quite literally resting on their laurels for a few thousand years.

But America sits within shouting distance of the postwar boom, close enough for it to shout back. Our country is haunted by the 1950s like no other decade. The dividing line through the American heart isn’t the Mason-Dixon, but rather the debate over if the 1950s are something to run to or run from.

“Don’t Worry Darling,” the latest from director/actor Olivia Wilde, is no exception to this obsession. The story follows the young married couple of Alice (Florence Pugh) and Jack (Harry Styles, whose appearance earned a rousing standing ovation from a row of teen girls at my screening.) They and their neighbors live in the edenic company town of Victory, run by the mysterious Frank (Chris Pine).

As this is the 1950s, the men drive off to work at Frank’s top-secret company while the wives stay at home to cook, clean, and otherwise refrain from abstract thought. All except for Alice, of course, who begins to pick up on incongruences in her perfect life. 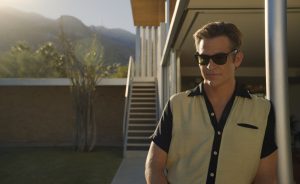 It wouldn’t be too much of a spoiler to reveal that there’s a dark underbelly to this suburban paradise. (When was the last time there was a movie about the 1950s that wasn’t about the seedy undercurrent beneath the facade? It would be more of a shock to see a positive depiction of consumerism and emotionally distant parenting.) In a not-so-shocking twist, Alice uncovers that Victory is a virtual reality town, where husbands wipe the memory of their wives so they can live in a world where the patriarchy is in full swing. I know, stop the presses.

Still, the brazen predictability of the story here raises a far more interesting question, not about gender roles, but rather the aesthetics of traditionalism.

The current battle for America’s soul has bogged down into trench warfare, with neither side conceding an inch. As a result, the war has shifted to more frivolous battlegrounds, particularly the field of aesthetics: both right and left try to wring meaning out of the polyester, believing there is something inherently good or evil in what amounts to a mound of fabric.

The film is correct in its diagnosis that there are plenty of men who think tradition comes from aesthetics, rather than aesthetics reflecting established virtues. The men of the story have done nothing to deserve their wives’ respect; they feel it is owed to them. If there is a crisis of masculinity these days, it comes from trying to reconcile that the respect once obligated must now be earned. The literal retreat by the men of Victory reflects the spiritual retreat some men make of old-fashioned dress up, hiding from the world instead of working to change it. I’ve seen many a man’s pained expression as he coughed on a pipe, smoking not out of desire but to follow the furrows of masculinity already cut before him.

Director Olivia Wilde hints more at this with her villain. Frank, who appears to be modeled after popular psychologist and conservative speaker Jordan Peterson. Like Peterson, Frank attracts a following of directionless men, adrift in a society that has no real need for them. Frank often speaks in Petersonian axioms, the substance of which matters less than the conviction he inspires in his devotees.

Peterson, of course, is far more constructive and less murderous in his advice, but the parallels seem deliberate. A declared agnostic, Peterson speaks favorably of Christ but sees more use in the teachings of Jesus than any divine considerations. Peterson sees religion and tradition as tools for a good life, merely means and not ends in themselves.

The other side of the coin is just as disordered, treating traditional aesthetics as a black magic totem. Throughout history, numerous articles of clothing have become symbols of female oppression. There are hardly any positive correlations with the corset, and there is a horrifying chance that your mother burned a bra in her day.

But that each era needs a new symbol of subjugation suggests that the evil never lay in these articles of clothing, but in a shifting system outside of it. The patriarchy is crafty and blends well into whatever age it finds itself in. After all, there were a lot of men in the audience of those liberating bra burnings.

By treating mantillas and dresses past the knee as the chains of misogyny, they are granted a power they never asked for, and credit where men never tried. The male sex is not dictating fashion; we can barely stay awake while we wait for you outside the dressing room.

The corset was made by women and for women, and the slander against it is technically misogynist. Even as Wilde paints this 1950s world as a male fantasy, her camera lovingly trails up and down Alice’s many dresses. If it is a cage, even she must admit it's gilded.

If there is a lesson here, it’s that there is no lesson. Traditional aesthetics don’t impart any meaning beyond their own beauty; the only thing worse than burdening them with sociopolitical purpose is to burden them with purpose at all. Beauty is a gift from God, and the best gifts are useless. So, if you insist on swilling your glass like Don Draper, have the decency to kill your liver simply for the pleasure of it.