Evangelizing countries where the faith has been watered down and resolving the ongoing financial crisis in the Vatican are challenges which will extend past the reign of Pope Francis, author George Weigel said on Monday.

Weigel was discussing his new book “The Next Pope” with members of Catholic press in a webinar on June 22. 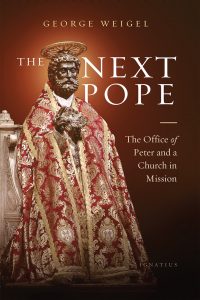 “The Church is living, vibrant, and effective in society where Catholics have embraced Catholicism in full and are joyfully living missionary discipleships,” said Weigel. In contrast, he said, places that have embraced a version of Catholicism which departs from aspects of the Church’s moral teaching, which he termed “Catholic lite,” have seen the faith have a waning influence on culture.

Weigel referenced several European countries where Church leaders have proposed sweeping accommodations with secular culture. In German, the bishops have inaugurated a “binding synodal process” to examine various aspects of Church teaching and discipline, including consideration of the blessing of same-sex unions, the ordination of women, and the repeal of clerical celibacy. Local lay leaders in the process have also come under scrutiny for their open support for abortion providers.

In Belgium, which has brought in sweeping permissions for euthanasia, some Catholic bodies have been at the center of ethical healthcare provision, with some seeking to accommodate the practice and others insisting on adhering to the Church’s teching on the sanctity of life.

The next pope, he said, will have to negotiate both bringing these people back into the fold, as well as “encouraging those who have full confidence in the Gospel.”

Weigel also said the next pope will be forced to confront the ongoing issue of financial reform in the Vatican.

“The Holy See is in very serious financial trouble,” said Weigel, adding that there is a possibility that the Vatican could declare bankruptcy by the end of the year. The Holy See’s financial issues, he said, stem from a combination of “corruption,” “incompetence,” and “a culture of nepotism, in the broadest sense of the term.”

In 2014, Pope Francis established the Secretariat for the Economy under Cardinal George Pell. In the years following its creation, the secretariat advanced a comprehensive vision for financial reform, insisting on a wholesale audit of Vatican assets and a review of procurement procedures, but many of those reforms were later stalled or reversed.

In May, Fr. Juan Antonio Guerrero Alves, SJ, who succeeded Pell as prefect of the Secretariat for the Economy, said that the Holy See expects a 30-80% income reduction in the coming year. And the Holy See has run large deficits for years; including a 70 million euro deficit on a 300 million euro budget for 2018.

Earlier this month, Pope Francis published new laws governing Vatican financial dealings, setting new standards for contracts awarded by the city state and curial departments, and aiming to inject transparency and accountability into the budgeting process of the Holy See and its institutions.

The next pope, Weigel said, must bring in “competent people,” including laymen and women, in order to complete the work of addressing the Church’s financial problems. Doing this will mean breaking with established hiring and promotion policies from within the curia, he added, pointing out that at present many career curial officials are appointed to jobs for which they have had little prior experience or expertise.

“It means stopping this rather curious idea that just because someone has been a good nuncio somewhere, that they know anything about money and investing money and managing money,” said Weigel.

“The Next Pope” is being published by Ignatius Press and will be released on July 7, 2020.

Saint of the day: Benedict of Nursia