It was quite fitting for a Catholic actor and a Christian director of a new streaming series on the life of Jesus to meet Pope Francis on the feast of St. Clare of Assisi, patron saint of televisions and screens.

Jonathan Roumie, who portrays Jesus, and Dallas Jenkins, the series' director, creator and co-writer, were in Rome as part of an effort to expand the global reach and revenue of the multiseason, crowd-funded series, "The Chosen." They sat down with a small group of reporters, including Catholic News Service, a few hours after the audience Aug. 11.

Jenkins said he told the pope, "I'm a Protestant, but I'm making a show about Jesus that people of all faiths appreciate." The pope pointed to the bearded, wavy-haired Roumie next to him, asking astutely, "Is he Jesus?"

After Jenkins said, "Yes," the pope decided to poke some fun, asking Jenkins, "Are you Judas?" sparking a round of laughter. 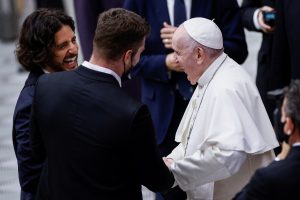 But, in all seriousness, Jenkins and Roumie have said in multiple interviews, the last thing they are aiming for is to betray the beauty and truth of Jesus.

"I do want people, when they are done watching the show, to feel like they know and love Jesus more or at least want to know and love him more," Jenkins told reporters.

The problem with most renditions of biblical accounts, he said, is that a two- or three-hour film is not a lot of time to do a deep-dive into the characters, backstories, motives, conflicts and context connected with biblical events.

Not only do the characters often come across as "stiff" on screen, he said, "you go from miracle to miracle, Bible verse to Bible verse, and you never get to know anybody Jesus actually impacted."

"From a strictly artistic perspective, that is not really good drama, you need to see change, you want to see a character arc."

"The Chosen" was going to be different, Jenkins said, by looking at Jesus through the eyes of those he chose and changed, and to imagine what their lives and personalities were like and why they made the choices they did.

The finale of season two dropped mid-July and the plan is to make a seven-season show, giving writers and actors the time to fully explore and create "a collection of personal human moments," he said.

Chilean Father Felipe Herrera-Espaliat, a journalist and officer of the Vatican's Dicastery for Communication, told Catholic News Service Aug. 10 that the series' approach reminds him of the way St. Ignatius of Loyola encouraged people to read the Bible and "create the scene in your mind," activate all the senses and engage one's feelings.

The reason, he said, is to "get involved so you can take the place of one of the people that is in that scene. I think that's what they are doing (with the series), and that helps a lot," because it prepares people for a deeper relationship with and understanding of the Word of God by becoming "part of that scene."

"That is how literature and art works, you become a part of this, you are a witness of what is happening," he said. Seeing Scripture from various human perspectives "does not change the eternal truth of the Word of God, but helps you to live that Word and to incarnate it in your own life." 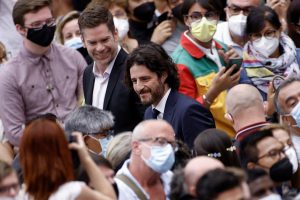 Director Dallas Jenkins and Catholic actor Jonathan Roumie, center with beard, of the series "The Chosen," attend Pope Francis' general audience in the Vatican's Paul VI hall Aug. 11, 2021. Roumie plays Christ in the series, which was launched in 2019 as a media project with the aim of showing Jesus in a new way; it became the highest crowd-funded project of all-time. (CNS photo/Guglielmo Mangiapane, Reuters)

After years of struggling for success in L.A.'s film industry, his Catholic faith was strengthened after he hit "the lowest point of my life" three years ago, he said. He decided to just "surrender" and give up trying to control every outcome and just let God lead the way.

Soon after, Jenkins gave him a call about the possibility of the new series; Roumie had already worked with Jenkins, portraying Jesus in a few short films with limited audiences. Those projects were good "practice runs," Roumie said, and doing "The Chosen" "has deepened my walk with Christ."

When he's on camera, it's like the wristband: "What would Jesus do?"

"For me it's trying to heighten the emotional experience that we have as humans," he said, and imagine, "How might Christ have experienced joy and happiness and sadness and anger and solitude?"

He also tries to extend God's qualities of love, mercy and compassion to others on set and in his own life, he said, "so that if I'm recreating it in a scene, it's organic, it's real, it's based in truth, it's not fake."

Viewer feedback has been overwhelmingly positive, said Neal Harmon, co-founder and CEO of Angel Studios, the series' distributor. The show has high marks from film critics on RottenTomatoes.com, with 100% "freshness" and a five-star average rating from thousands of users.

The series opened as the largest crowd-funded media project ever, collecting more than $10 million from more than 19,000 people to make the first season. It has more than 250 million views on the app, where people can watch for free and people can "pay it forward," donating money to keep the show free for future episodes. There are an additional 10 million views of season one on the show's YouTube channel, which has 1.3 million subscribers.

The studio backed "The Chosen" and helped it crowd-fund, he said, because it wanted a TV show with "high production quality like Hollywood but without Hollywood's purse strings." 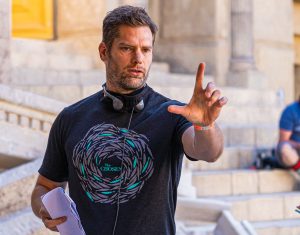 Director Dallas Jenkins gestures on the set of the series "The Chosen." The series was launched in 2019 as a media project with the aim of showing Jesus in a new way, and it became the highest crowd-funded project of all-time. It is available for free on an app. (CNS photo/The Chosen)

The app (thechosen.tv/app) is available in more than 180 countries, and the series offers subtitles in more than 50 languages and voiceovers in nine, including Arabic, Hindi and Mandarin Chinese, he said.

"The traditional Hollywood movie has a certain set of languages that it goes to, based off of profitability, and 'The Chosen' has kind of been the opposite of that" by responding to donors' requests for which languages be made available, he said.

But Harmon said sometimes people still react to hearing about the show with an eye roll, thinking, "'Another show about Jesus, another history show...' and they don't think it's going to be what it ends up being when they watch."

Father Herrera-Espaliat told CNS the series is "an incredible production" of high professional quality and a big investment by so many people who want to see the Bible brought to life on a screen.

"Entertainment can be a very good way to reach people," he said. "Many people don't have Bibles, or they have a Bible and they never open it, so maybe the only way they will have first access to the word of God will be through these kinds of productions."

He said people should explore the series with "an open spirit and a very mature Christian point of view in order to understand that this is not the Word of God" and nothing can substitute the Word of God.

It's important to "have critical thought" and encourage quality content, otherwise viewers will be stuck with "low budget," dubious products that may just be pushing an agenda, he said.

But whenever there are "good translations of the Word of God into the audio-visual world, I think it's a step forward," said Father Herrera-Espaliat.

The series is "not pretending to be the last word or the exact interpretation of the Bible," he said, and it can be "a very good door" to help people encounter Christ.