Film recalls the ‘Hollywood Priest’ who disrupted the entertainment industry

With his imposing 6-foot-6 stature, steely jaw, and a heart on fire for the Gospel, Father Ellwood “Bud” Kieser, lovingly known as the “Super Priest,” once cut a larger-than-life figure from the pulpit of St. Paul the Apostle Church in Westwood. The stars in the pews included Jerry Lewis, Jane Wyman, and Ricardo Montalbán, in a time when much of Hollywood still went to church.

But 20 years after his death, a new documentary details how Father Kieser also brought the church to Hollywood: Paulist Productions’ “Hollywood Priest: The Story of Fr. ‘Bud’ Kieser” takes audiences to the center of the limelight, with insights into Father Kieser’s influence on show business and how he navigated an industry that grew away from the moral compass of the Catholic Church.

Father Kieser landed at St. Paul the Apostle, a few miles from Beverly Hills and Hollywood, after arriving from Philadelphia in the 1950s. A Paulist priest, he had been formed to evangelize through media. The film recounts how while teaching his popular adult inquiry classes for Catholics and curious non-Catholics, he captured the attention of one attendee, Joe Connelly, the writer-producer behind “Leave It to Beaver.”

With support from his Tinseltown parishioners and a passion for engaging the popular culture, Father Kieser’s anthology TV series “Insight” debuted in 1960 under his Paulist Productions banner. With nearly 300 episodes, it was at one point the longest-running syndicated weekly show on television.

The Hollywood priest had a hand in almost every aspect of the Emmy-winning series that lasted more than two decades, enlisting a who’s who of A-list talent, including Martin Sheen, Ed Asner, Cicely Tyson, Patty Duke, Ron Howard, and Gene Hackman. The film tells us he was able to do this regardless of each actor’s faith tradition.

“Bud was a force to be reckoned with. He knew how to twist arms. He knew how to ask for things he had no business asking for. People were afraid when they saw his name on their call sheets in Hollywood every day,” Father Eric Andrews, president of the Paulist Fathers, quipped. 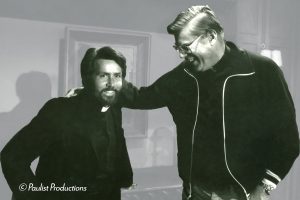 As a Paulist attuned to the cultural moment with a hand extended to nonbelievers, Father Kieser was far from a Bible-thumping preacher at the pulpit. Televangelists with fists full of dollars crowded the airwaves in the ’70s and ’80s. They were a stark contrast to his come-as-you-are inclusivity and introspective yet bold style.

“I was trying to work the no-man’s-land between the past and the future, the frontier between the world and the Church, and needed all the assistance I could get,” he wrote in his 1991 autobiography. “And sometimes I needed to do more than listen.”

To that end, the priest could be found picketing with Cesar Chavez in the vineyards near Bakersfield or with Franciscans at a nuclear test site in Nevada. He joined the boards of multiple organizations dedicated to social justice, and visited U.S. airmen in Japan. Later, he established the prestigious Humanitas Prize.

Not one to shy away from complex subjects, Father Kieser tackled themes on “Insight” like racial justice, abortion, and capital punishment. “Bud Kieser and I were always seeking ways to take the Gospel message and apply them to the contemporary world,” explained “Hollywood Priest” producer Terry Sweeney in the film.

Father Kieser took the same approach with his top-rated “Family Specials.” After seeing a gap in the industry for meaningful entertainment for teens, Father Kieser set out to create programming that allowed them space to contemplate their personhood, engaging them with questions about sex, drugs, death, divorce, and more. He cast young up-and-comers in the roles, including Laura Dern and Emilio Estevez.

Father Kieser was also outspoken in his criticism of Hollywood’s use of gratuitous sex and violence, but didn’t favor government censorship. Instead of ignoring the dark, despairing ways of the world, Father Kieser challenged his writers to examine the issues closer, with heart.

“Father Kieser wanted to kick the writers in Hollywood in the butt, to say to us you need to be more responsible for the episodes that you write,” Humanitas Prize-winning “St. Elsewhere” and “Homicide” writer Tom Fontana shared in an interview. 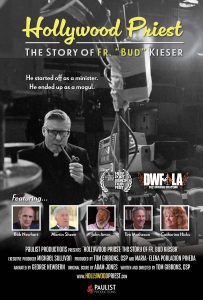 In a 1999 PBS interview, Father Kieser expounded on this further: “If American media is a contributing cause of violence in our society, I think in the future, television and motion pictures could become just the opposite, a significant contributor to the decline of violence in our homes and on our streets.”

In “Hollywood Priest,” we meet a man who was not immune to the murky trappings of humanity himself. The film explores the spiritual crises, loneliness, and pain Father Kieser faced in his role as priest, including during his close relationship with a nun. In a moving segment, we learn he eventually found healing after traveling to Africa with “Roots” actor John Amos, helping the communities affected by famine.

These stories are told against the backdrop of Father Kieser’s battles with the FCC, a Church trying to implement the reforms of Vatican II, and the shifting political and social mores of the turbulent ’60s and ’70s. Tastefully animated photographs, charming personal anecdotes with his acclaimed collaborators, and archival footage help bring Father Kieser’s story to life.

Today, the Gospel messages he propagated still look for a home on film and television screens, even if the media landscape looks vastly different (there’s a reason why studios are looking for the next “Ted Lasso” during the COVID-19 pandemic). Sixty-one years since the first “Insight” episode aired, Hollywood still doesn’t have an open-door policy regarding religious entertainment. But Father Kieser was never interested in pushing religious doctrine as he was with trying to “illumine the human situation,” building bridges to meet people where they were.

“Hollywood Priest” is an honest portrait of a man of God who had the gravitas of a philosopher and the sharp wit of a movie mogul. Enlightening the entertainment industry and holding its players accountable seems like an impossible task. But Father Kieser was able to disrupt the Hollywood machine and help redefine what it means to tell human stories.