‘Father Stu’ is the film about the priesthood we needed

I used to think “The Passion of the Christ” was Mel Gibson’s best Catholic film. I was wrong.

“The Passion” is grimly realistic and heart-wrenching, but Gibson’s performance as a bitter, angry, non-Catholic husband and father in the new film “Father Stu” is more personal.

“Father Stu” is a modern “via dolorosa” that speaks directly to anyone with an original sin ID card in his pocket.

I also used to think Karl Malden’s performance in the classic movie “On the Waterfront” was the most inspirational portrayal of the priesthood in film. I was wrong.

Malden’s dockside priest is tough, dedicated, and human. But Mark Wahlberg as an aimless, godless man, prone to violence and a host of other serious flaws, is a character made for our times. The fact that this character, Stu, is based on a real man, with real flaws, who felt a call to the priesthood, makes this a powerful film.

I wasn’t sure I was in for a powerful experience when I attended an advance screening of “Father Stu” in Los Angeles a few weeks ago. Truthfully, I went in with a heavy dose of trepidation — I am not a fan of overtly religious movies. As a rule, I avoid them; I find them clumsy, preachy, and poorly executed.

When I settled into my seat amid nuns in their habits and priests in their collars, I had the uneasy feeling that I was part of a marketing ploy. It’s a strategy that has helped many mediocre films make money: pander to a large but specific audience and rely on their networks to promote the film.

I was wrong again.

Barely two minutes into the movie, I heard the first F-bomb, shaking up my expectations and making me think I was not watching a typical religious movie. The more I looked, the more I liked. “Father Stu” is uniquely unlike other movies with religious themes, Protestant or Catholic. And it certainly isn’t like the 1940s Bing Crosby musical “Going My Way.”

Lots of films with clerical characters use street language. Those films almost always exist to explicitly satirize the faith, or demonstrate how “erroneous” it is. There is also a long list of films with Catholic content whose creators obviously have only a fourth-grade understanding of what the Church holds to be true. You could fill a book the length of “War and Peace” with movie references to the Immaculate Conception that suggest it has something to do with a virgin birth.

What “Father Stu” delivers instead is an honest Catholic film. The faith is treated like the mysterious shining city on a hill that it is, with the Church as the keeper of that city, even though members of that same Church can be seriously flawed. 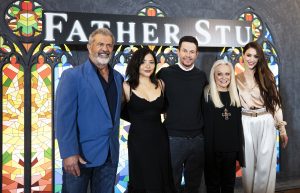 The film is unafraid to celebrate the masculinity of the priesthood. Stu is a tough guy. He was an ex-boxer, and as we see more than once, he’s not shy about using his fists. The overused term “toxic masculinity” certainly applies here. But when Stu channels that masculinity away from destructive sins, and toward a strong and still masculine pursuit of Jesus, his life (and our movie-watching experience) is elevated to a higher plane.

Femininity is a prime force in this film as well. The complementary nature of men and women — something the Church refuses to yield to popular culture — is the path on which Stu begins his journey. Mexican actress Teresa Ruiz plays the “love interest,” but when Wahlberg’s Stu sees her at first, love is not on his mind. Ruiz’s character frustrates him — she is a “good” girl, and deeply committed to her faith. But if she wasn’t this person of outer and inner beauty, Stu would never have had the introduction to the truth and beauty of faith in Jesus and the Church.

Wahlberg is a joy to watch. His Father Stu is childlike in his approach to life with guileless optimism. And this carries over when he begins to believe in the promises of Christ. Lacking a spiritual component to his childhood and young adulthood, he is a true innocent. The more he learns from his girlfriend about the faith, the deeper his understanding becomes.

When Stu has a near-fatal motorcycle accident, another woman enters his life. He has a vision of the Blessed Mother, praying and weeping over his broken body on the pavement. When Stu recovers, he knows his journey — his vocation — is to serve God as a priest.

Everyone suffers in this movie, especially Father Stu. You’d think that this would be depressing, but, like everything else about the faith, it is counterintuitively the opposite. When all the characters attach their suffering to the foot of the cross, miraculous things happen.

“Father Stu” takes a bold, unapologetic, positive stance on the priesthood. The priesthood is not for the squeamish. It is not for men running away from something, but for men running toward something. In “Father Stu,” we see the priesthood as the powerful, heroic vocation that it is. It does not sugarcoat the life of a priest, and isn’t afraid to highlight the many nuanced, complicated, and sometimes contradictory personalities of men who discern a vocation. And it does all this with joy.

I predict “Father Stu” will hold a place as a Catholic family classic for generations to come. I can imagine a young man who may be discerning a call to the priesthood, watching “Father Stu” and thinking, “this is what I want to be. This is the fire I want to stoke. This is the love that Jesus is asking me to give.”

The Oscars don’t have a category for how many vocations a movie has inspired, but if they did, “Father Stu” might hold the record for a long time to come.

“Father Stu” will be available in theaters on April 13.