It's one thing to read about mistakes and wrongdoing in the criminal justice system, especially when it comes to death penalty cases, but it's quite another thing to hear firsthand from someone who had been in prison for 12 years, including nearly 10 years on death row, for a crime he didn't commit.

That's what happened Oct. 25, when Alfred Dewayne Brown, released from prison in 2015, was part of a panel speaking via Zoom to participants at the Ignatian Family Teach-in for Justice, an annual event for students from Jesuit high schools, colleges and parishes around the country.

In a discussion about the death penalty, the 38-year-old told the group briefly about life in the small cell where he spent each day without human contact. When he was asked how he kept hope, he said kept his mind active and used the early hours between 3 a.m. and 5 a.m. to meditate; he also read and drew.

Now living in Louisiana and working as a truck driver, he said he tries to be outside as much as possible. 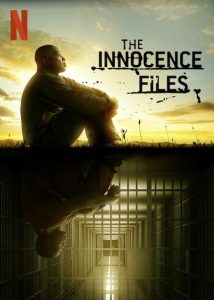 Alfred Dewayne Brown is seen the poster "The Innocence Files" streaming on Netflix. He was part of an Oct. 25, 2020, Zoom panel at the Ignatian Family Teach-in for Justice, an annual event for students from Jesuit high schools, colleges and parishes around the country. (CNS photo/Netflix)

Brian Stolarz, Brown's pro bono attorney while he was on death row, told the group about Brown's case, which is chronicled in an episode of "The Innocence Files," a Netflix docuseries telling the story of eight cases of wrongful conviction. The cases were investigated by the Innocence Project, a nonprofit legal group committed to exonerating individuals who claim they have been wrongly convicted, primarily through the use of DNA testing.

In Brown's case, there was no DNA, but there was a missing phone record -- his alibi, which suddenly turned up in 2013 -- and there also were questions about witness coercion by the prosecuting attorney.

Brown is the 154th person exonerated from death row since 1973. The African American was arrested in 2003, when he was 21, on capital murder charges and two years later was indicted by a grand jury for killing a white Houston police officer during a robbery, with two others, of a check-cashing store.

Brown contacted the Innocence Project about his case, and Stolarz, who had worked as a public defender in Brooklyn, New York, was assigned by the firm where he was working at the time to do pro bono work on it.

Currently a partner at the Fox Rothschild law firm in Washington, Stolarz said it took three years until Brown trusted him. But during the eight years of working on this case, he said, it was Brown who brought him "peace and grace" frequently telling him through the glass partition separating them that "it's all gonna be all right."

Stolarz spoke to the group after Krisanne Vaillancourt Murphy, executive director of the Catholic Mobilizing Network, gave some death penalty statistics and spoke about how Catholic Church leaders, particularly Pope Francis, have spoken out against capital punishment.

She also urged participants to get involved in anti-death penalty activism, which was the point of many of the workshops and general sessions of the Oct. 19-26 event, sponsored by the Ignatian Solidarity Network. This year's event was forced to meet online this year because of COVID-19 restrictions.

Brown's attorney noted that he and Brown were repeat speakers at the Ignatian Family Teach-in for Justice. "There is something special in the air every time we come here," he said.

He also spoke about growing up in a Franciscan parish in New Jersey where "service to others was part of everything we did." He also said that when he as a law school student at The Catholic University of America, he became convinced of the need to be a voice for others, something he said was his calling and something he urged the students to be aware of and to "answer the call."

Stolarz, who also is highlighted in the Netflix film, wrote about his experience in a 2016 book: "Grace and Justice on Death Row: The Race Against Time and Texas to Free an Innocent Man."

In a webinar for Catholic Charities Legal Network in the Washington Archdiocese this summer, just after the Netflix series was released, Stolarz said Brown's forgiveness and grace had particularly touched him.

"He has forgiven his captors," Stolarz said, adding: "Every day, I say the prayer of St. Francis. For me, I focus on 'for in giving that we receive' because it is in giving my time to Dewayne, that I received a bounty. But for Dewayne, his forgiveness is the real focus point of that prayer."

Brown, when asked at the Ignatian event what advice he had for students, put it simply: "Stay positive. Think everything through. Don't move too fast but move fast enough to get it done."

Although he was declared eligible for monetary compensation for wrongful imprisonment, these funds have been denied by the Texas Office of the Comptroller, which Brown is appealing to the state Supreme Court.

Stolarz told the group he has a GoFundMe page for Brown, and said he "won't stop until full justice is given to him."