When Steven Spielberg’s original “Jurassic Park” was released in theaters 29 years ago, the film was largely faithful to the vision of the original book, written in 1990 by novelist Michael Crichton. An uncompromising cynic in his depiction of the abuses of science, Crichton wrote “Jurassic Park” to criticize the ways money polluted the sciences, to explore how greed and ambition blind science, and how it makes it stop asking important ethical questions. Spielberg similarly saw the delusions of science as tragic, that a person can want something to be true without realizing the consequences of his actions.

Three decades and five sequels later, such questions feel out of place in modern discourse, which increasingly holds up science as the ultimate source of human survival and enlightenment.

That’s a concise description of “Jurassic World: Dominion,” released in theaters June 10. The film is a story about climate change and the way people don’t react to the imminent destruction of the world. Those are certainly two relevant concerns nowadays, but the film’s treatment of them makes for a story blind to its own implications.

Four years after the events of “Jurassic World: Fallen Kingdom,” “Dominion” is set in a world still adjusting to thousands of dinosaurs being set loose on the American heartland. Just as people are starting to get a handle on it, a race of genetically modified locusts starts spreading across the world killing crops.

Only Alan Grant (Sam Neill), Ellie Saddler (Laura Dern), and Ian Malcolm (Jeff Goldblum), the three lead characters from the original film, can now save the world by infiltrating an evil corporation, which happens to be building a new dinosaur park in South America, and discovering proof that their machinations are causing the end of the world.

The stakes this time are apocalyptic, with the global food chain at risk. The possibility of mass human starvation is the subject of cynical reflection by hipster tech developers, bugmen, and baristas who shrug at the reality that the world is about to end.

It’s clear that this film is trying to find a way to bring the themes of the original “Jurassic Park” full circle, dragging the ideas and characters of the original Spielberg film back to the forefront.

The result is messy.

As was the case with some of its predecessors, the vision of science in “Dominion” lacks a clear ethos. They indulge the flashy CGI dinosaurs and cutting-edge special effects, but never fully capture the heart of the original. Earlier sequels, “The Lost World” and “Jurassic World,” offered brief glimpses of it, telling stories about evil corporations and their failure to respect the power of nature, but they never recreated the energy and emotional impact of that first film.

It’s an ethos that leaves much to be desired. It is full of overwrought anti-corporate clichés, like the evil CEO who puts his profits over the good of the world. The corporation is so evil that it is even called Biosyn (emphasis on the last syllable). There is no insight or humanity to the story, just one-dimensional characters and cool dinosaurs.

“Jurassic World: Dominion” ends up a multimillion dollar blockbuster made by a major corporation about why multimillion dollar corporations shouldn’t be trusted. It is thematically obtuse. The film’s climate change commentary means it also has to affirm scientific progress as a solution to the problems science creates. The moral lesson is that man cannot control nature without dire consequences, except to stop climate change. Trust the scientists, don’t trust the corporations. Technocracy is good, except when it isn’t. 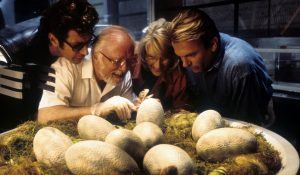 This moral obfuscation is the exact opposite of Crichton’s thesis. He went so far as to depict park creator John Hammond as an arrogant villain who didn’t realize that his dinosaurs were maladjusted monsters that could barely breathe in our oxygen rich atmosphere. The park was so poorly managed that its computers couldn’t keep track of the predatory animals roaming the island, and the results were ghastly. Jurassic Park proves so dangerous that the Costa Rican military finally wipes it off the map in an apocalyptic ending.

The book famously ends with Dr. Malcolm monologuing about the dystopian futility of man’s attempts to control nature, even implying that climate change activism and environmentalism are deluded: “The planet is not in jeopardy. We are in jeopardy. We haven’t got the power to destroy the planet — or to save it.”

The movies need not be this bleak. The heart of Spielberg’s “Jurassic Park” is best seen in the moment when Dr. Ellie Sattler confronts Hammond. The park is in chaos, the power is out, and its lead scientist is in a cafeteria alone with several pints of melting ice cream while his grandchildren are lost in a park filled with carnivorous dinosaurs. He wants so badly to make his dream come true, but reality is crashing down around him. There is no saving Jurassic Park, but there are more important things to save now.

Spielberg’s Hammond isn’t a villain, but rather a tragic character, a Willy Wonkaesque dreamer who doesn’t realize his dream can’t work. In hindsight, he was also a perfect avatar of our times, capturing the enthusiastic hopes of our world’s great reformers who want to use science and reason to fix the world’s most pressing issues.

“Jurassic World: Dominion” is just as deluded as Hammond was, failing to realize that sometimes our dreams don’t make the world a better place and that we don’t have full dominion over the world, that one selfish man can turn off the fences and destroy our creation in an instant. One CEO’s greed can cause the starvation of millions. We aren’t perfect avatars of reason and rationalism and our efforts to play God create monsters.

“Dominion” is at once tedious and cynical but also perfunctory in its need to pay homage to the technocracy of our times. In doing so, it loses the heart and soul of the original story and seems to have forgotten — or confused — its message.

Tyler Hummel is a healthcare journalist with Main Street Nashville and a freelance entertainment critic.