Distorted faith and the KKK in ‘Burden’

It’s a scar on our nation’s history, a painful memory that makes audiences everywhere wince: the Ku Klux Klan. Even more painful is the thought that this memory is not just a relic of the distant past.

We might remember it as a spooky story from the post-Civil War era or as an unsettling yet faded photograph from the Civil Rights era. But as recent as the late 1990s, the KKK was alive and active in a small South Carolina town.

This is the story that Andrew Heckler’s “Burden” splashes on screen.

In a gripping drama based on a true story, “Burden” compels audiences to grapple with a notoriously unsettling piece of history and consider the web of human flaws that make up racial discrimination.

The film won the Sundance Film Festival’s Audience Award for best U.S. dramatic film in 2018, and it’s no surprise: It sends a powerful message that can resonate with audiences on both a societal and personal level. The story focuses on Michael Burden (Garrett Hedlund), a committed Klansman who falls in love with a woman who stirs in him a change of heart.

The opening scene presents Burden and friends smashing walls and clearing space in an abandoned movie theater, which they then convert into a museum celebrating the KKK. In response, the local African American minister, Rev. Kennedy (Forest Whitaker), calls his congregation to prayer and peaceful protest. But tensions rise as the groups — and particularly as Burden and the reverend — interact.

Through its variety of intriguing and multilayered characters, “Burden” deftly avoids descending into a politically charged statement or a simplistic “us versus them” narrative. Instead, it exposes the ugliness of blind hatred while also revealing the complexities and struggles of people on all sides of the issue.

One key strategy Heckler employs is to highlight various characters’ relationship with faith, which encompasses their search for belonging and purpose. In each of their experiences, the message is clear: True faith, the kind that brings peace and fulfillment, is anything but easy.

Early on, the film presents the warped faith that the KKK members hold on to. Through a slew of intense and disturbing scenes, Heckler thrusts the viewer into the world and mindset of white supremacy. The Klan members gather around a cross and invoke God as they set it on fire, proclaiming themselves to be a chosen race called to protect the purity of their people and nation.

Heckler is careful to intertwine moments of the group’s camaraderie. For instance, Klan leader Tom Griffin (Tom Wilkinson) often speaks of Burden as his son, alongside the bitterness, indecency, and violence they inflict on black people.

This combination emphasizes that the KKK members’ sense of faith and companionship is rooted in fear, insecurity, and ignorance. The nuanced portrayal also helps hint at how Burden’s fierce loyalty to the Klan might have crystallized, and how leaving it required an upheaval in the course of his life.

Meanwhile, Rev. Kennedy preaches a gospel of love from his pulpit. But notably, he and his family soon find that loving one’s enemies becomes much more difficult when it becomes personal.

When the reverend finds Burden, his girlfriend Judy, and her son Franklin homeless and desperate, he must decide whether to believe their story that Burden has left the Klan and now faces ruin as a result. And when Rev. Kennedy decides to bring them home, his family must face the challenge of welcoming as a guest a man who has beaten and mocked their friends. 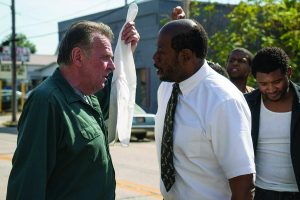 The natural hesitation, fear, and even anger the reverend and his family members release at various moments in the film shape them into profound characters with real human struggles, which is far more compelling than a cast of simple, easily saintlike churchgoers would be. Those emotions also make their decision to act with charity all the more powerful.

While Burden is the main focus of the film, he is not the only one who experiences conversion. Both he and the reverend, as well as their families, rediscover and deepen their faith throughout the film. In every circumstance, the primary vehicle for this kind of transformation is a loving human relationship.

Neither the characters nor their circumstances are perfect, as their mistakes and problems readily show. Burden has a quick temper. Judy is a single mother, and her son’s father is never spoken of. Rev. Kennedy wrestles with doubt and fear, while some in his congregation want to respond to the KKK with violence.

These struggles make the characters’ faith journeys raw and realistic; they make the extreme circumstances of their lives ones that can speak to viewers’ daily, ordinary struggles.

What’s more, the characters’ many stumbles along the way also make the persistence of loving relationships stand out as a signal of hope. They reaffirm the message that although faith is difficult, it leaves no one beyond redemption.

“Burden” is a powerful story of how faith can change hearts, but only alongside an unwavering spirit of prayer, compassion, and hope in the goodness of people. It challenges viewers to love their enemies not just in an abstract way but concretely, every day, with their next-door neighbor. This makes the movie hard to watch, but important to see.