As recently as Christmas, they still had hope that their Bible-themed film “Resurrection” could premiere in theaters in time for Easter this year. When it became clear that would not be possible, they had to choose between holding it until next Easter or settle for a TV release.

It was a partnership with new streaming platform Discovery+, home to a growing amount of family-friendly content, that helped them choose the latter.

Downey, a practicing Catholic best known for her longtime role in the 90s TV series “Touched By An Angel,” hopes that “Resurrection” (available now) can bring comfort to families in a year marked by suffering and isolation. She spoke to Angelus about the difference she hopes the film can make and what the single most important event in salvation history means to her personally.

This is not the first film on the Resurrection, and it will not be the last. What is new or different about this one?

I think what is different about our movie is that it deals only briefly with the crucifixion and focuses on the events that followed the death of Christ as seen from the point of view of the disciples.

We see them gather after the death of Jesus, after they had all run away and betrayed him, overcome with guilt and fear, not sure what to do next. But we see Mary ask them to wait. Trust, wait! She never stops believing in her son’s resurrection.

We have also focused on the Pentecost and the birth of the Church. Before ascending, Jesus instructs his disciples to go share the good news. But the disciples are unable to accomplish this mission until they receive the Holy Spirit. They are in the upper room and the Holy Spirit arrives –– we have been able to illustrate this through special effects, fire, flames, speaking in tongues –– and they pour down into the streets and now they are ready to preach the gospel.

The other novelty in the film structure is how it creates much drama and tension –– you could say it plays like a thriller–– by opposing the apostles to two other groups, the Jews, and the Romans. Neither of these groups is really able to accept Jesus.

I think the movie does a great job of showing the “scandal” of the cross, how, as St. Paul says, “we preach Christ crucified, a stumbling block to Jews and folly to Gentiles.” If you will allow me a more personal question, what has the cross meant for you as a Christian woman? And in what way have you experienced the Resurrection?

The cross has been present in my life from the beginning. When I was very young, my mother died unexpectedly of a heart attack, without any warning. She had been the light, the music, and the laughter in our family. When she passed it was as if the light had been turned out and the music had been turned off.

I don’t believe I had any help other than going to Mass and looking at the cross. In front of that cross I understood a little bit of the suffering of Jesus, but it was the promise of the Resurrection that gave me back my joy, the realization that I may live my whole life without my mother, but that one day I would be back with her. This is the promise: He rose to let us know that we can count on that, that we do not have to be afraid. To receive this promise has been the greatest blessing in my life. 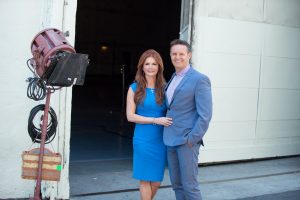 In a 2009 address to the Roman Curia, Pope Benedict XVI famously encouraged the Church to open a sort of "Court of the Gentiles," a space to dialogue with those who may not believe. Can art, particularly film, be a space for encounter? And can a movie like “Resurrection” speak to the nonbeliever?

I certainly hope so. There is a quote by the Persian poet Rumi: “Out beyond ideas of wrongdoing and rightdoing, there is a field. I’ll meet you there.” I learned from him the idea of meeting beyond the place where we disagree. There has to be room for dialogue and connection. And it is not that we are more divided now than we used to be, but we have lost the grace to be able to disagree.

As far as “Resurrection” speaking to the nonbeliever, I can tell you about my experience with “The Bible,” a series we ran on the History Channel a few years ago. Many of our friends in Hollywood told us not to make it, that no one would watch it. So we were delighted when over a hundred million people watched it in the U.S. alone. And so many priests and pastors have come to share with us that many people have returned to the Church because of the series. Even people who did not know God came to know God.

How do you see your role as a Catholic woman in the entertainment industry, an environment that is often described as hostile to Catholics?

As we show in “Resurrection,” the great mission Jesus has entrusted to his Church after the Pentecost is announcing the gospel, and everyone answers their call to this mission differently.

I have the privilege that I can combine what I believe with what I do, and I have done it throughout my career, from my days in “Touched by an Angel,” which at the height of its success had over 25 million people tuning in every week, hearing there is a God, that he loves you, and he wants to be a part of your life.

And if you look at the movies I have produced and the work I have created, you can see that this message is embedded in all of them. Film and TV cannot provide a full answer to one’s search for God, but they work as a visual way to remind people that God loves them, is something that can begin to open up hearts. Our lives are very busy and full of distractions; we hardly ever have time to reflect. Films can help us stop and create a time for us when we can hear this voice.

Hollywood is often described as a place that is hostile to Catholics, but I have to tell you that my experience has been different. Perhaps it is because I have been here and have been an outspoken believer for so long, but people have always been very respectful. I don’t feel I ever really had any pushback. Somehow, I feel that God has come ahead of me and made the path straight and prepared the way.