A film that moved audiences, critics, and even lawmakers to action 35 years ago is making a one-day comeback to theaters around the country this Sunday.

“El Norte,” which tells the story of a brother and sister’s perilous journey from Guatemala to the United States, was nominated for a Best Original Screenplay Oscar award in 1985.

The film is widely credited with helping prompt the U.S. government to action with the 1986 Simpson–Mazzoli Act, which extended the protection status for Central American immigrants.

Thanks to a restoration by the Academy Film Archive (supported in part by the Getty Foundation), the film is showing in select theaters around the country at 2 p.m. on Sunday, September 15.  Proceeds from the screenings will be donated to help survivors of last month’s mass shooting in El Paso.

Last Saturday, “El Norte” director and screenwriter Gregory Nava was among the hundreds who packed into the Cathedral of Our Lady of the Angels in downtown LA to pray for immigration reform at the annual Mass for All Immigrants.

In email responses to questions from Angelus News, Nava explained how his Catholic faith has shaped his perspective on the immigration crisis and why he thinks “El Norte” is a relevant film in 2019.

Kay: It's been 35 years since your film "El Norte" was first released. A lot has changed with respect to immigration trends and policy since 1984. But what, in your view, hasn't changed?

Nava: Refugees’ fleeing the violence of their homeland seeking sanctuary and trying to save their lives and the lives of their families has not changed. This has been the same not just since 1984, but since time immemorial.

After all, in the Gospel of Matthew an angel warns Joseph that King Herod wants to kill his son and orders him to “flee to Egypt.” And so, like many families today, the Holy Family fled violence in their homeland seeking asylum in a foreign land, and that land, Egypt, did not turn these refugees away but had empathy. The story of the “Flight into Egypt” tells us that we need to treat refugees with compassion.

This is the message of “El Norte” and it is the same today as it was 35 years ago.

Kay: Since you made "El Norte," how would you say you've grown, both as a filmmaker and as a Catholic?

Nava: The farther I go in my life the more I understand how much I need God’s grace and how important the sacraments are.  Receiving Communion at the Mass for All Immigrants was one of the most moving experiences of my life. 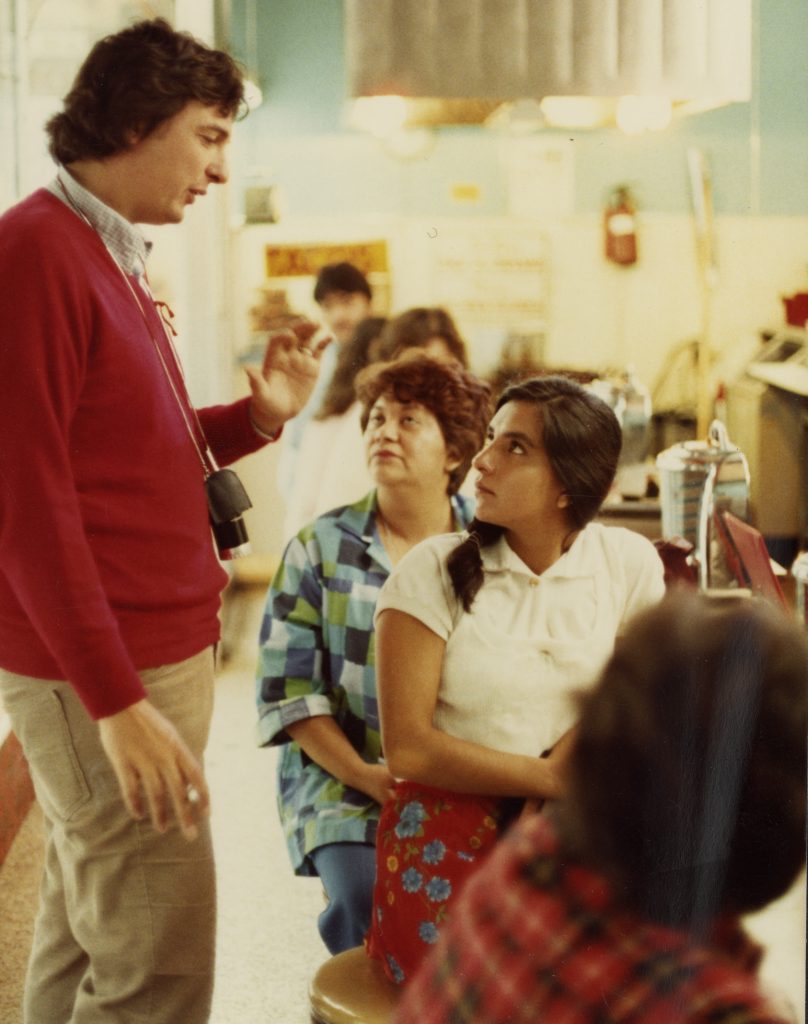 Kay: You recently attended the Mass for All Immigrants at the Cathedral of Our Lady of the Angels celebrated by Archbishop Gomez. Why did you go, and what was your experience?

Nava: Archbishop Gomez’ dedication to immigration reform is truly inspiring — I wanted to support his efforts and support all the immigrants who have come here. Our nation is a nation of immigrants.

Today we have a crisis on our southern border, and we need to deal with this crisis with love and understanding. For God could have entered the world through any family but God chose to enter the world through a family who were refugees. If one wants to see today’s “Flight into Egypt,” one needn’t look any further than our U.S./Mexico border.

Kay: By the way, you have an interesting connection to the Cathedral. Can you tell us a little bit about it?

Nava: My brother, John Nava, is an artist who designed and executed the magnificent tapestries depicting the Communion of Saints that hang in the Cathedral. These tapestries feature not just saints that were canonized but anonymous saints – inspiring us – that we all can do saintly acts.  He did a beautiful job – I’m very proud of him.

Kay: Archbishop Gomez has long said that immigration reform is not just a political issue, but a spiritual one. Do you agree?

Nava: Absolutely, immigration continues to be one of the most politically polarizing issues in America.

But the wisdom of the Bible is both simple and timeless. Here is a passage that tells us how we should treat immigrants, refugees and those in need of help. “When a foreigner resides among you in your land, do not mistreat them. The foreigner residing among you must be treated as your native-born. Love them as yourself, for you were foreigners in Egypt.” (Leviticus 19:33-34)

The Bible’s plea for compassion is a deeply spiritual message that resonates throughout the millennium.

Kay: This coming Sunday, September 15, theaters across the country are playing "El Norte" to mark the anniversary of its release. Why should people go see it again?

Nava: “El Norte” is considered a “classic” film and the restoration that was done by the Academy of Motion Picture Arts and Sciences is gorgeous. But most importantly – if you’ve seen the film before or if you have yet to see it – its message of compassion and humanity for immigrants is needed more today that when we first made the film.

I hope everyone can come together – see “El Norte” and carry its message into the dialogue that is now taking place in our country.  We need to build bridges – not walls – we need policies of compassion, not cruelty – that is the message of “El Norte” and it needs to ring loudly in our country once again.