Bible in a Year: Have you heard about Father Mike Schmitz's next project?

On Dec. 31, listeners to “The Bible in a Year (with Fr. Mike Schmitz)” were able to hear the 365th and final episode of the hugely popular podcast, as Schmitz wrapped up the last verses of the Book of Revelation.

The following day, Jan. 1, brought a revelation of a different sort: “Bible in a Year” stood atop the charts as the No. 1 overall podcast in the U.S.

“That’s amazing,” Schmitz, 47, a priest of the Diocese of Duluth, said in a recent interview with EWTN Nightly News anchor Tracy Sabol. “That’s such a testimony to people’s faithfulness and their hunger” for God.

This is the podcast’s second stint at the top of the Apple podcast charts. After the show’s launch in January 2021, it held the No. 1 position in all podcast categories from Jan. 2–18, 2021, something no religious podcast had ever done.

“We are overwhelmed by the staggering response to this podcast,” Matthew Pinto, founder and president of Ascension, said in a statement earlier this month.

“We had hoped that this program would be exciting to our listeners, but this huge level of response is truly unbelievable. People are hungry for God, and we’re honored to help them encounter God’s Word through a daily podcast, especially as so many of us continue to be cut off from our parishes, communities, and loved ones during these difficult days.” 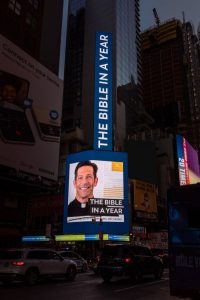 A "Bible in a Year" billboard was displayed above New York City's Times Square in December and January. (Courtesy of Ascension via CNA)

Each episode of “Bible in a Year” lasts roughly 20-25 minutes and features two to three scriptural readings, a reflection on those readings by Schmitz, and a prayer.

Instead of reading the Bible linearly, the podcast follows “The Great Adventure Bible Timeline,” developed by scripture scholar Jeff Cavins. Cavins was a featured guest on the podcast.

The podcast's latest No. 1 ranking coincided with Schmitz’s appearance on an enormous billboard overlooking New York City’s Times Square in December and January.

Schmitz told Sabol that three “ingredients” helped make the podcast more accessible to listeners who otherwise might have been too intimidated by the prospect of reading all 73 books of the Bible.

“Those three things — just press play, you have a map, and you have a guide — I think that was a really good mixture of ingredients to help people who really desired to hear God's word to be able to actually follow through all 365 days.”

Though the podcast has now concluded, it will remain available on every major podcast app for new users to listen to in the future.

Ascension also will host a virtual retreat in February to support the community that grew around the podcast in 2021.

Now that “Bible in a Year” has concluded, what’s next for Schmitz?

Schmitz revealed to Sabol that his original pitch to Ascension was to read both the Bible and the entirety of the Catechism of the Catholic Church in combination over the course of the year.

“I'm really glad we didn’t do it at the same time because that would have been a whole other can of worms,” he said.

Now, however, a catechism-in-a-year project is in the early stages of development, Schmitz revealed. You can hear Schmitz discussing the project in the video below.

“We wanted to give people a time to be able to finish the Bible podcast before they had this other thing, you know, on their shoulders,” he said, “and so we're going to start it in 2023, God willing, if we get all the t’s crossed and the i’s dotted.”

Father Mike Schmitz, Podcasts, The Bible in a Year