Ahead of its one-day release in theaters, ‘Alive’ has already succeeded

Here’s a scene for you.

A young man, dressed like what people my age would call a “hippie,” is seated on the ground in the countryside of Spain, near what looks like the ruins of a convent. Rolling up his sleeve, he reveals a tattoo your mother would never like to see on your forearm. He has kicked off his sandals and a small black ant plays on his toes. He smiles and stretches out an arm pretending to hold an imaginary host in his fingers.

“And imagine,” he says with a laugh. “People were telling me that this little piece of bread was God.”

The young man’s name is Jaime, and the scene is from “Alive: Who Is There?,” a documentary made in Spain and due for a limited, one-day release in U.S. theaters on April 25. It’s a film that is well-made and profound, depicting how the Real Presence of Jesus in the Eucharist has transformed the lives of five real people in modern Spain, a country where traditional faith has met tremendous challenges in recent years, to put it lightly.

Jaime in the new documentary "Alive," which tells the stories of five people changed by their encounter with the real presence of Christ in the Eucharist during Holy Hour. (Courtesy Bosco Films)

These are stories like Jaime’s, a young man from Seville, who recounts his journey through adolescent turbulence and adherence to neo-Nazi ideology to a genuine love for the Eucharist.  There is Andrea, a young lady from Barcelona whose boyfriend was killed in a car accident as she was about to start college. They were high school sweethearts, apparently, and she had looked forward to him being a permanent part of her future life. She grew up in a family with no great faith and considered believers beyond the pale of her circle of friends. Carla was a friend she met at university, whom Andrea initially found “annoying” for telling her she was praying for her and the boyfriend who died.

Despite her finding Carla strange for being “Christian,” Andrea grew close to her. One night she called her to ask her out for a drink, but Carla was going to a Holy Hour. Andrea didn’t even know what that was, but sometime later accompanied her friend to prayer before the Blessed Sacrament. She was surprised to find great peace there. Her conversion had begun. 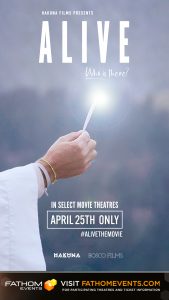 Sonsoles and Antonio were a couple in Madrid with a regular but not fervent participation in the Church. Sonsoles went on an “Emmaus” retreat and Antonio remembered being skeptical about all the emotion. It turns out, we learn, that God had planned the strengthening of their faith before a real test in the form of a high-risk pregnancy.

At 48 years old, what Sonsoles thought was a symptom of menopause was actually a pregnancy. Doctors were not very optimistic: Early tests suggested a chromosomal abnormality of the child and several professionals recommended abortion. But their faith was sustained, they said, by their frequent participation in eucharistic adoration. Antonio, whose fervor was awakened, said they would tell Jesus in the sacrament the news of each ultrasound (“not that he didn’t know, but we had to say it to him”). Their child, a young girl now with no visible abnormality, sits embracing Sonsoles during the interviews for the documentary, and we see footage of her baptism and a Mass of Thanksgiving for her life.

Carlos was a happy atheist studying medicine and living what he calls a “normal” life when he met a friend, Josepe, who talked him into going on a mission trip to Calcutta. Before leaving, he told his family and friends not to worry about him becoming a believer. Even in India, working with the Missionary Sisters of Charity of Mother Teresa, he was the standout in the group, at first not going to daily Mass every day or attending Holy Hours.

Then, to please his friend, he started to attend the Eucharist and the adoration times. He was unsettled by the experience, which he found very powerful. When he explained to his friends that he was now a believer, they were quite surprised. One joked that she could not have been more shocked if he had said he was transgender.

Like Carlos, a pilgrimage to Calcutta was also a decisive moment for Jaime. His admiration of the sisters, their indefatigable work ethic and their love of the Eucharist proved life-changing for him. The two make quite a pair. Carlos confesses a love for Nietzsche before meeting Jesus. Jaime says he wanted to help people with material things but then thought that spiritual needs were greater. Despite their striking differences, we learn that both are considering a vocation to the priesthood.

Inspired by the “Hakuna” movement, a pious association of young Catholics based in Madrid, the documentary has already had Top 10 box office list success in Spain and Mexico. It’s one-day release in the U.S. certainly seems like a tougher bet, but I am curious to see how it will fare: attention to niche markets is growing, as evidenced by the regularly scheduled showings of films from India with English subtitles at my local cinema.

I know that I hope many people will see the film. Immediately after watching it, in fact, I started forming a mental list of people I’d like to see it. Already, however, “Alive” has accomplished something special: In 2022, who could have expected a movie about the Eucharist changing people’s lives to enjoy any kind of serious commercial exposure?