For the Vikings of ‘The Northman,’ Christianity is the only way forward

An odd quirk of conquering kingdoms is that they often develop a nostalgia for the vanquished foe. The barbarian hordes were quick to adopt Roman dress and style. America wove a beautiful fantasy of the Noble Savage once our natives were safely diminished and sequestered to the reservations. Once a nation is no longer a threat, its last utility is to represent some edenic notion of yesterday.

The same holds true for Christendom and paganism. There is a soft-focus wistfulness for our pagan past detectable across the political spectrum. The Wiccans keep hoping that the right combination of herb and thyme will pay their rent, while the far right tries to project racism onto a culture that didn’t consider themselves white.

In “The Northman” (released in theaters April 22), director Robert Eggers makes no such concessions. As in with his previous films “The Witch” and “The Lighthouse,” Eggers essentially takes the respective historical moment at its word, accepting their beliefs and superstitions without a trace of judgment or dramatic irony. The flip side is he doesn’t sand off the edges, as the passing years do in their kindness.

Similarly, this film is unflinching in its depiction of Nordic paganism, not retreating from swinging genitalia and exposed viscera in favor of the warm familiarity of a mead hall. But while his camera doesn’t judge, there is implicit recognition throughout that this is a fading world.

Like Mel Gibson’s “Apocalypto,” we get to see the waning days of the old ways, and how encroaching Christianity offers some a way forward and others a retreat into oblivion (warning: spoilers ahead).

“The Northman” follows Amleth, a Nordic prince (played by Alexander Skarsgård) who pledges an oath of vengeance after his uncle murders his father and marries his mother. If this sounds familiar, some light rearranging of Amleth’s name might explain the origin.

But while the tragedy of that Danish prince was inaction, Amleth’s tragedy is his blinding commitment to his quest, his myopia toward the failings of the culture. Anton Chigurh once asked, “If the rule you followed brought you to this, of what use was the rule?” Amleth’s fatal flaw is he questions himself too infrequently and too late.

In exile from his rightful throne, young Amleth falls in with a band of Vikings and is raised into a glistening paragon of a berserker. A raid on a Rus village early in the film does not shy away from the full ramifications, with images too gruesome to describe here. 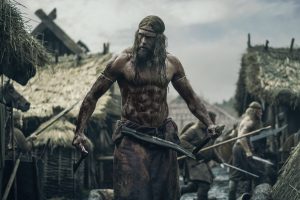 Alexander Skarsgård in "The Northman." (IMDB)

Eggers doesn’t shame these marauders, who are only acting to their moral code, and in the smoldering aftermath, the berserkers have the tone reminiscent of a long day at the office. Only Amleth does not engage in the massacre of innocents, and we later get hints that in his reluctance, even this feral beast of a man feels the stirring of something higher within.

When a seeress reminds him of his oath and prophecies that he will have to choose between “kindness to his kin or death to his enemies,” that moral progress is sidelined. Following these new pagan marching orders, he returns under the guise of a slave to the remains of his kingdom. Christian King Harald Fairhair has driven his uncle from Norway to the barrens of Iceland, and as anyone tricked into a layover there can attest, that is not optimal.

His revenge is served cold and over several courses. Most shocking of his initial psychological warfare is Amleth nailing several of his uncle’s men into the shape of a horse.

“Could this be the Christians?” frets the local shaman, “their God is a corpse nailed to a tree!”

A funny line, but one that betrays the existential dread of these pagan remnants. Driven off by emergent Christianity back home, they fear that the religion has followed them even here. The Christian mentality, that God could make himself as corporal and frail as an executed body, frightens and bewilders the pagans to no end.

They are quite literally Christ-haunted, hounded and harried the same way a herding dog bites his sheep into formation. They will cling to the old ways to the very end.

Amleth’s initial victories are cathartic, but as the bodies pile up, we grow weary at the full extent. The uncle was reduced to past relevance before he even got there, and as we later learn, he isn’t necessarily worse than Amleth’s own parents were.

The hollowness of the quest can’t help but pale, like most things, in comparison to a nearby blonde. One of the slaves from the village is Olga of the Birch Forest (Anya Taylor-Joy) a clever sorceress with whom he forms an alliance to carry out his revenge (and which predictably evolves into a romance).

His flawless execution, in both senses of the term, only derails when Olga’s life is in danger. As this selfless love provides him his first real happiness in years, the seeress’ words echo in his ears. Is he bound to his oath, or can he simply let the past be past and start a new life with Olga?

The pair are quite literally sailing off into the sunset when Amleth learns that Olga is pregnant. The true tragedy of the story, well beyond the various beheadings and eviscerations, is Amleth’s decision to swim back to his fate.

This is not the Scandinavian version of going out for cigarettes and never coming back. Amleth wants to make sure his uncle never threatens his future progeny. Still, that is cold comfort to his heartbroken love. He chooses to honor his family in abstract, to live an honorable life rather than a virtuous one.

It’s difficult to show kindness to your kin when they are also your enemies, but rather than embrace the mystery, or perhaps even Christ, he chooses to die nude in a volcano, quite literally in a lake of fire at the gates of a place called “Hel.”

But one final interpretation offers a glimmer of hope. Amleth has visions of a mythical tree of kings, the lineage leading up to him. The moment he discovers Olga is pregnant, he sees his future twins budding on the tree, the girl in particular wearing a unique crown and carrying a scepter.

Considering the dates and history, some online critics have theorized that Amleth’s daughter will be St. Olga of Kiev. Besides sharing Olga’s name and home country, the historical Olga is also reputed to have Viking ancestry. She is often credited with bringing Christianity to the Rus, and subsequently driving paganism out.

Perhaps Amleth, in his moment of rapture, saw the full swath of history and his place in it. While unable to follow his family into the future, Amleth stays behind to ensure that the Old Way dies with dignity, with ax aloft and Valhalla awaiting.

Joe Joyce is a screenwriter and freelance critic transmitting from the far reaches of the San Fernando Valley. He has been called a living saint, amiable rogue, and “more like a little brother” by most girls he’s dated.