When “A Quiet Place” came out three years ago, the film was an overwhelming success, earning strong box office numbers and mostly positive reviews.

Its sequel, out in theaters since May 28, is, well, a sequel. Once again, there is no real villain in “A Quiet Place Part II,” just more of the mysterious, deadly alien-like creatures who have taken over the earth and make up for their lack of sight with a keen sense of hearing. A human’s only hope for survival is staying quiet — very quiet.

That is still the case in “Part II” (warning: spoilers ahead). Newly widowed Evelyn Abbott (Emily Blunt), her two surviving adolescent children, and her newborn baby are still in survival mode, traveling barefoot across rural upstate New York after the loss of Evelyn’s husband Lee (John Krasinski of “The Office” fame, also the director of both films) and their young son.

Viewers may find the sequel’s timing ironic. “Part II” has arrived more than a year since we were first asked to save our physical lives (and those of others) by hunkering down at home, avoiding direct contact with other people, and covering half of our faces in public. 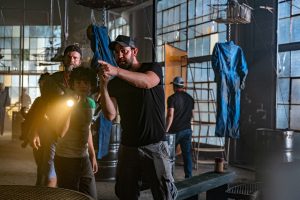 The Abbotts, it seems, were a couple years ahead of us.

Now, with COVID-19 numbers falling and vaccination rates climbing, theaters are looking to get people back together again, off their couches and into cinemas. “A Quiet Place” has been enlisted in that effort, with billboards around Los Angeles quoting a critic’s high praise: “This is the experience theaters were made for.”

It is hard to argue with that. While it struggles to maintain the novelty and brisk pace of the original, “Part II” still finds ways to thrill, using bursts of noise and silence to dramatic effect throughout, as if someone in the projector room were playing with the mute button.

The film starts with a flashback to the day the aliens first arrived in their corner of upstate New York, interrupting their idyllic small town’s Little League tournament — and claiming some lives in the process.

More than a year later, the family is still on the run. After an accidental breach of the silent code, the Abbotts are saved by a familiar face from the flashback: family friend Emmett (Cillian Murphy), who, coincidentally or not, is wearing a face covering when we first meet him at the abandoned steel mill he now calls home.

Evelyn’s first words to Emmett feel pandemic-appropriate: “Show me your face,” she demands, while he pleads with her to get lost.

But Emmett, who has also lost family to the blind invaders, has a conversion moment and reluctantly joins the Abbotts’ deaf daughter Regan (Millicent Simmonds) on a quest to track down the source of a mysterious radio broadcast. Meanwhile, Evelyn and her wounded son Marcus (Noah Jupe) struggle to remain undetected back at the steel mill. 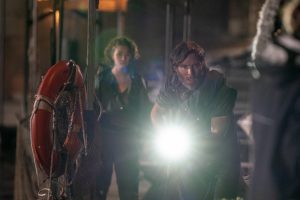 The Christian themes of the first “Quiet Place” were hard to miss. Bishop Robert Barron, who called it “the most unexpectedly religious film of 2018,” pointed out a few of them: how the aliens force the aptly named Abbott family into a monastic existence of quiet work, hushed prayer before meals, and elaborate sign language; the effort to protect and eventually welcome new life during Evelyn’s perilous pregnancy; and Lee’s Christlike act of self-sacrifice to save his daughter’s life.

“How wonderful that a Hollywood movie would suggest that what is needed to keep the darkness at bay in our time is silence, simplicity, a return to the earth, prayer, and care for one another,” Bishop Barron wrote at the time.

Even without Lee to shepherd them through the apocalyptic dark valley, those themes are still familiar in the sequel. Toward the beginning of the film, we see Evelyn putting her baby in a floating basket while water floods her home. Later, before venturing out in search of medical supplies for her family, she assures a terrified Marcus: “You have everything you need.” And during that field trip, she visits the makeshift shrine where her other son was killed and solemnly leaves her wedding ring as an offering.

But perhaps the most Christian statement in the film comes when Regan and Emmett discover fellow survivors living tranquilly in an island commune, seemingly safe from the blind aliens.

“We didn’t come to find help, but to give it,” Emmett assures one of his new friends, as if understanding that their peace is only temporary.

The altruistic sense of mission here is nothing new — forms of it are rather common in pop culture (look no further than the heroic quests in “Star Wars” and “The Lord of the Rings”).

Still, such a narrative hits differently at the tail end of our extended stay-at-home retreat from viral danger. While the first “Quiet Place” emphasized the virtues of silence, the second shows us its limits.

Sure, religious or not, we all need places and moments to retreat from the bombardment of noise from our world. But we also need to talk to people, to relate to our fellow survivors, to visit places and things we hold sacred. We also need sometimes, as “A Quiet Place Part II” suggests, to get out of our comfort zones and simply move.

“Part II” was made well before COVID-19. In fact, it was planned for release in March 2020, the month the pandemic shutdown started. But perhaps, one might wonder, there was a different plan at work, one that has made “A Quiet Place Part II” a profound, accidental reflection on what our collective silent retreat has done to all of us.